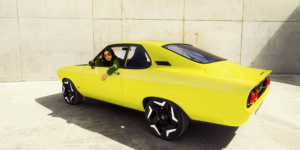 Opel has confirmed that they will offer the successors to the Crossland SUV and Insignia sedan only as pure EVs. On the way to becoming a 100% EV brand, the cult Opel Manta will also return by mid-decade as an electric car.

Opel, also known as Vauxhall and now part of Stellantis, reportedly wants to sell only electric cars from 2028. In a statement, the carmaker has now confirmed that the successors to the Opel Crossland and Opel Insignia will be electric and thus emission-free.

The current generation Insignia B – incidentally the last Opel model on a GM platform – and the Crossland with PSA technology were launched in 2017. According to the car industry’s usual product cycle, a new generation is due in 2024 or 2025 at the latest – the investment in relying on internal combustion engines again for these few years would not be worthwhile.

“Opel is on a consistent path to going electric – and in record time,” says Opel boss Uwe Hochgeschurtz. “We are thus making an important contribution to reducing CO2. And we will not stop with the conversion of our product range: Together with our partners, we will be manufacturing our own high-performance batteries in Kaiserslautern as early as 2025. In addition, a resource-friendly new campus is being built at our headquarters in Rüsselsheim.”

The declared goal is to offer electric vehicles “perfectly meet the demands of customers: in future, this includes driving ranges between 500 and 800 kilometres and a best-in-class fast-charging capability of 32 kilometres per minute,” according to Opel. However, whether this will already be the case with the upcoming Insignia and Crossland, the company left open in today’s statement.

It is unclear which platform the two vehicles will utilise; it could also depend on the exact launch. The all-electric Stellantis platforms ‘STLA Small’ to ‘STLA Large’ will probably not be rolled out until 2026. If Opel delays the generation change slightly, both models could use these modern platforms. Otherwise, it will likely be the standard technology of the EMP2 and e-CMP platforms – the Crossland, for example, is closely related to the Peugeot 2008.

In addition, the carmaker confirmed once again that they would relaunch the “reinterpretation of the Opel Manta” as an additional battery-electric model in the middle of the decade. However, Opel/Vauxhall had already announced as much in July 2021, after positive reactions to the Manta GSe ElektroMOD.

“The new Opel Manta will be a highly emotional car once again,” said Hochgeschurtz.