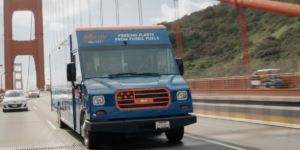 In the USA, Motiv Power Systems is partnering with Our Next Energy (ONE) for battery technology for Motiv’s 6th generation all-electric vehicles. The vans, trucks and buses based on the new platform are currently being tested and will launch in early 2023.

Motiv Power is based in California. Soon their step vans, trucks, and buses will feature ONE‘s Aries LFP battery system, allowing them to be deployed with a full vehicle payload on routes of more than 150 miles per charge.

“This is a major milestone for our commercial customers – who deploy EV fleets every day that are critical to driving business results,” said Tim Krauskopf, CEO of Motiv Power Systems. “In fact, the expanded 150-mile range easily doubles the number of addressable routes a fleet can complete with Motiv trucks and buses – which means they’re able to deliver more goods, services, and people for their customers,” Krauskopf added.

The new battery technology from Michigan-based company ONE comes from the commercial sector. The new batteries will enable Motiv to provide 156 kWh with two battery packs instead of three packs for 127 kWh. The LFP cathode chemistry is free of nickel and cobalt, which helps lower costs and avoid both geopolitical and ethical sourcing issues associated with some nickel and cobalt extraction.

The scalable architecture provided by ONE is said to allow for series and parallel configurations and at least 3,000 recharge cycles. The company uses an integrated Battery Management System (BMS) that also protects against overcharging. The resulting new 156 kWh battery system will take up 30 percent less volume than its current 127 kWh configuration.

Just last week, ONE announced that it has raised further capital and plans to build a battery factory. ONE’s 58.6-million-euro funding round was led by BMW i Ventures. BMW already invested in the company last year as part of the Series A financing round.

Motive’s new platform will be the 6th generation. This generation will include a new motor. The new vehicles will be available across Motiv’s entire range of vehicle applications in 2023.