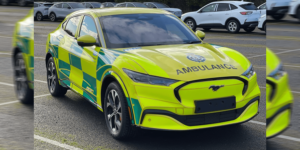 The London Ambulance Service (LAS) is buying 42 Ford Mustang Mach-E to use as fast-response vehicles, along with three electric motorbikes.

The purchases are part of a wider initiative to clean-up its fleet of about 1,000 vehicles to comply with London’s newly expanded ultra-low emission zone. The three electric motorbikes will be the first to the service, but the LAS has not revealed which models were purchsed.

LAS has said that about 100 of its front-line and “back office” vehicles will be electric or hybrid by the end of the year. The total purchase was for 225 new vehicles, the majority of which will be combustion engine vehicles. 19 of these are Ford’s new 3.5 tonne “lightweight” ambulance, based on the Ford Transit chassis, and 21 new conventional ambulances, which LAS says are more fuel-efficient than those currently in operation.

These new lightweight ambulances are said to have the potential to be converted to electric. Although there are already electric ambulances under development, LAS says that currently, the amount of power required by the on-board medical equipment is an issue.

In August last year, the UK’s NHS announced that it will be cooperating with Ford to develop fully electric ambulances from the E-transit with the Venari Group, after which the British National Health Service said it was planning to purchase a fleet of the vehicles. Last year in Canada, Demers Ambulances and Lion Electric unveiled the first all-electric and purpose-built ambulance. The Demers eFX Ambulance is scheduled to enter into commercial production in the second half of this year.