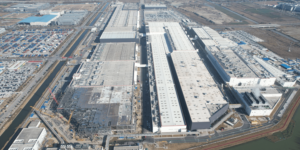 According to an agency report, Tesla is suspending production at its Shanghai plant for two days. The background is likely a Covid 19 outbreak in China, leading to strict movement controls in some cities, including Shanghai.

Reuters reports this, citing a memo sent to Tesla employees and suppliers. Specifically, it refers to Wednesday and Thursday of this week. Tesla gave no direct reasons in the letter, but a connection to the Covid outbreak is likely – authorities had ordered many residents not to leave their homes or workplaces for 48 hours to 14 days for Covid 19 testing.

The current infection outbreak is China’s largest covid-19 outbreak in two years. The measures had also affected other companies, including VW, which had to pause production at no less than three Chinese plants – although probably not at any of the MEB plants.

According to one of the letters to suppliers that Reuters was able to view, Tesla is preparing to operate in closed-loop management. Suppliers are said to be preparing their workers to stay in the factories and sleep and eat there. Apple supplier Foxconn was already allowed to resume production in Shenzhen on Wednesday under such a condition, which was also previously interrupted.

It is probably still open whether the entire Shanghai plant or only sections are affected. Two people briefed on the announcement told Reuters they understood it referred to Tesla’s vehicle assembly lines in ‘General Assembly’. According to the statement, production in other areas, such as drive assembly (which initially also supplies the German gigafactory in Grünheide) could continue to operate. However, Tesla has neither confirmed nor commented on the information.

Tesla produces around 2,000 vehicles per day in Shanghai, based on the latest figures. As a result, approximately 4,000 Model 3s and Model Ys would be affected by a two-day production stop. This figure is based on the 56,515 units Tesla built in Shanghai in February, according to data from the China Passenger Car Association.

Tesla resumed production at its Shanghai plant on Wednesday and Thursday after a Corona-related two-day interruption, people familiar with the matter told Reuters agency. According to the unnamed sources, Tesla factory in Shanghai has been producing electric cars around the clock again since 7 a.m. local time on Friday.

Tesla would not comment on the latest information to Reuters. On Thursday, the company said it was doing its best to keep production running at its Shanghai plant while cooperating with authorities.