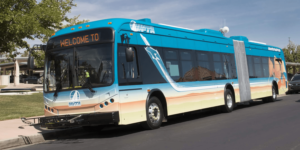 The Antelope Valley Transit Authority (AVTA) in California has become the first transit authority in North America to reach the goal of an all-electric fleet.

AVTA operates 87 electric buses – 57 from BYD, 20 from Motor Coach Industries (MCI) and ten from GreenPower. The BYD buses were built at its Lancaster Coach & Bus Manufacturing facility. The company points out that BYD employees and their families are served by the agency in the Antelope Valley.

“Long before we saw an electric bus rolling down the streets of the Antelope Valley, the AVTA Board envisioned a future with a greener and technologically superior transit system serving the citizens of Lancaster, Palmdale, and the rural northern Los Angeles County communities,” said AVTA Chairman of the Board Marvin Crist. “The Board cast a vision and the AVTA staff, working together with BYD and many other electric vehicle and system providers, brought that vision to life.”

Portions of this fleet were purchased with the help of state funding. This includes $28.5 million from the Transit and Intercity Rail Capital Program (TIRCP) administered by Caltrans and the California State Transportation Agency.

Los Angeles County Supervisor Kathryn Barger pointed out: “The reality of today’s over the top gas prices is a stark reminder that we must continue investing in eco-friendly mass transit. It’s no longer become a choice – it’s more of a necessity.”