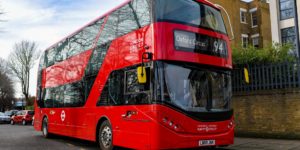 In the UK, the public transport operator RATP Dev London wants to purchase another 75 electric buses, including 54 double-deckers and 21 single-deckers. This is made possible by a loan of 30 million pounds taken out with the bank HSBC.

So far, it is only a declaration of intent after the loan commitment by the major bank for the equivalent of 36 million euros and not yet a concrete order placed. So officially, it is still unclear from whom the 75 vehicles will be ordered. The best chances are likely to be with the manufacturering cooperation of BYD and ADL, from whom RATP Dev London has already ordered a total of 260 electric buses.

The London publication CityA.M. reported on the loan and potential order, citing representatives of the transport organisation and the bank. “Transport is now the largest greenhouse gas emitting sector in the UK,” said HSBC’s head of sustainable finance Rob King said. “RATP Dev Transit London has identified electric transport as a clean and sustainable long-term solution to the demands of public transport in London, and we are very pleased to work with the business on providing this green loan financing.”

“We are pleased to be working hand-in-hand with HSBC UK and Transport for London to deliver new electric buses and provide sustainable public transport solutions with environmental benefits for all Londoners,” added RATP Dev Transit’s chief finance officer John Keenan.