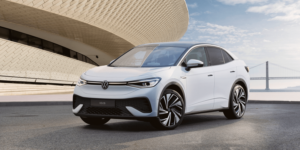 Volkswagen has confirmed that the ongoing production stop at its EV factory in Zwickau will also affect the ID.5 electric SUV. The new MEB car was slated to launch at the beginning of April, but the factory is missing parts that usually come from Ukraine.

VW now said it has to postpone the introduction of the ID.5 by about a month due to production difficulties. Automobilwoche reported with reference to a letter to the sales partners, the market launch of the VW ID.5 is now planned for the first week of May. A precondition is that the manufacturer can provide all agents with the necessary exhibition or demonstration cars.

Vehicles that are also already in the target stations will not yet be delivered “to ensure equal treatment of all partners,” so the carmaker. “In order to ensure nationwide availability of the vehicles for each agent, we will partially reallocate the showroom vehicles,” VW added.

The electric SUV coupé, which will initially only be built in Zwickau for sales worldwide, was supposed to be handed over to customers from the first week of April. Now it is clear: deliveries cannot start as planned. Customers will have to wait longer for their electric cars.

The news was not unexpected. Volkswagen a few days ago had already announced that the electric car plant in Zwickau would not resume production until the beginning of April. The reason for this is the lack of cable harnesses from Ukraine, which could not be delivered due to Russia’s invasion of the neighbouring country.

The production stop also extends to the Transparent Factory in Dresden which will also remain closed until April. Zwickau and Dresden are currently the only locations in Europe where VW builds electric vehicles based on MEB architecture.