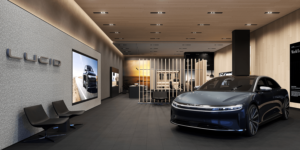 Lucid Motors announced opening a new Studio in Toronto. It is the company’s second outlet in Canada and 23rd in its growing North American retail network. The company expects to begin Canadian deliveries of the Lucid Air in Spring 2022. There’s also good news on cooperation with Electrify America.

Lucid Motors promises free fast charging on Electrify’s CCS network for the first two years to those who reserve a Lucid Air by 30 June 2022. Charging at the stations set up by the Volkswagen subsidiary in Canada will enable Lucid owners to add 350 kilometres in 15 minutes for models with 900+V architecture connected to 350kW chargers. The company points to their Grand Touring models offering 516 miles (830 kilometres) of EPA-estimated range.

“We are excited to work with Electrify Canada given the quality and reliability of its charging network and plans to expand across Canada,” said Zak Edson, vice president, sales and service at Lucid.

Lucid Air drivers will be able to access the stations via the Lucid app once they receive the cars this spring.

Lucid Motors hopes to “elevate the brand” in North America with the new showroom in Toronto. The Studio is located at the Yorkdale Shopping Centre in the capital of Ontario province.

In the US, Lucid started deliveries of its first electric car last October. In November, the company announced expanding its factory in Arizona to increase production from currently up to 34,000 electric cars per year to 90,000 vehicles per year by the end of 2023. At the time, the company claimed to hold over 17,000 reservations for the Lucid Air sedan. The relatively low number of orders have not discouraged Lucid to increase capacity even more. The company in March confirmed plans to build a second EV factory in Saudi Arabia this time.