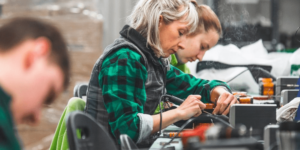 Green Cell, a Polish specialist in batteries and charging technologies for mobile devices and electric vehicles, has opened a new plant for e-bike batteries near Krakow. Up to 50,000 batteries per year are to be assembled at the plant in Balice.

The company says that the first e-bike battery model assembled there is already available. Over the course of the year, Green Cell will deliver a total of eight different types of electric bike batteries from its factory that fit the most common motors. Each battery has its own BMS that monitors and controls the individual cells during the charging and discharging processes.

Although assembly takes place in Eastern Europe, the battery models are primarily sold in Western Europe. According to Green Cell, each battery is individually tested in order to meet requirements. This involves machine tests that take up to four hours in addition to which, the quality control team also carries out manual tests.

“We want to ensure the highest quality, develop solutions from scratch, strengthen supply chains, build know-how and further increase our presence in foreign markets,” says Green Cell CEO Paweł Ochyński. “Our battery factory is an important element of our strategy. It initiated a change of course for the Green brand. We initially focused on selling mobile phone batteries and accessories, but moved to independent development and production a few years ago.”

Green Cell developed the factory and assembly process itself. The company says it has invested a total of 2.5 million euros in the Balice plant. It said this had been made possible due to the dynamic growth in turnover – in 2021, turnover this amounted to 61 million euros.

The manufacturer says it has several dozen business partners in Europe and intends to build further relationships with manufacturers, dealers and service centres for electric bikes. Green Cell says it is “open to cooperation with electric bike manufacturers and can assemble batteries for completely new e-bike projects”.

CATL to launch battery production in Germany this year