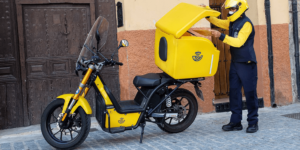 The contract is to be awarded at the end of May and the vehicles are to go into operation in November. The new electric motorcycles will expand Correos’ delivery fleet to around 2,400 electric vehicles and 300 hybrid vehicles. Back in 2018, we reported that the postal service was testing electric cargo bikes.

The Spanish postal services company – which was established in 1716 according to their website – began their efforts to decarbonise their fleets in 2017 when they launched a pilot project involving electric bikes was launched in Sevilla. This formed the basis of the testing in implementation of electric cargo bikes a year later.

The current tender for 800 electric bikes should enable the company to deliver to areas that have prohibited the use of combustion engines as well as meeting European environmental standards. The company says that when it puts these bikes into operation, they will become part of Spain’s largest electric delivery fleet.

In the tender just announced, Correos has said that the winners of the contracts must not only provide the vehicles, their transport and delivery , but also provide a series of additional services that includes warranty management, preventive and corrective maintenance , roadside assistance, ITV, fines , accidents, management of replacement vehicles, registration, documentation and training.

Correos, parent company of Correos Group, says it is one of Spain’s main companies in terms of size, territorial presence, human capital and physical and digital infrastructure. The company points out on its website that it has been appointed by law to provide the universal postal service throughout Spanish territory, whereby it is obliged to fulfill criteria of efficiency, quality and affordability, contributing to the sustainability of postal communications.