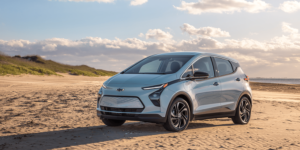 General Motors has some ambitious plans to ramp up production of electric vehicles. At present, however, there is not much to be seen of this: GM delivered just 457 electric vehicles in the US in Q1 2022.

The total number of individual vehicles sold over the year are as follows: 358 Chevy Bolt EV/EUV were sold alongside 99 GMC Hummer EV Pickups. The number of Bolt vehicles is down 96% versus the same period last year, due to a production shutdown, which General Motors claims to have nearly solved: “Production of the Chevrolet Bolt EV and Bolt EUV will resume on April 4. Chevrolet dealers continue to repair customer vehicles and recently resumed deliveries of some completed Bolt EV and Bolt EUVs in inventory.”

Considering that General Motors has received over 65,000 reservations for the electric Hummer, the company will have to seriously ramp up production if they want to follow through at this rate.

April Fools in the e-mobility field

Canoo to take astronauts to space