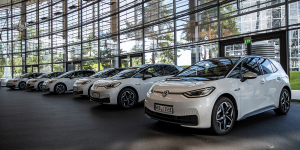 Tesla has offered over-the-air updates for many years, but Volkswagen has been slow to get into the game. While the company just introduced the latest OTA for ID cars, VW now finds that many of the EVs to receive it, need a recall first for a hands-on update.

But first to the beginning. A few days ago, Volkswagen presented the new software generation 3.0 for the MEB models as reported. The update is scheduled for Q2 2022 via an over-the-air update for all ID models already delivered and will be installed ex works for newly produced vehicles.

However, updates for delivered ID models are proving difficult. As Volkswagen confirmed when asked by Auto Motor und Sport, all VW ID.3 and ID.4 vehicles already out there will have to return to the workshop as part of a “voluntary” service campaign that will affect 200,000 owners who VW will probably contact from Easter onwards.

The purpose of the workshop visit, a VW spokesperson said, is to bring the existing fleet up to as uniform a software status as possible. “We have noticed that there are currently still a lot of vehicles on the road with very different software statuses,” they said. The ID.3 and ID.4 cars will first have to receive software version 2.4 at the dealership, without which the over-the-air update to version 3.0 is not even possible, VW explained.

However, there is another reason for owners to bring the cars back to the workshops. VW says the garages will fit every EV with a new 12-volt battery free of charge that is significantly more cycle-resistant and better able to cope with the high energy requirements of an electric car. The initially installed 12-volt battery might not have been able to cope with the complex OTA update to software 3.0.

Canoo to take astronauts to space