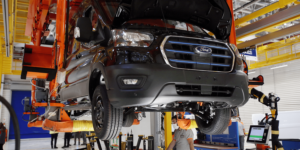 Ford has started the European series production of the E-Transit at the Ford Otosan plant in Kocaeli, Turkey. The manufacturer has received more than 5,000 orders for the E-Transit from European customers.

As the aforementioned 5,000 orders for the all-electric van have already been placed, Ford also intends to deliver quickly. According to the manufacturer, production at Ford Otosan will start at full capacity right from the beginning due to the order situation. However, Ford does not specify what production figures are planned per week or month.

“Production of E-Transit in our Kocaeli plant, where the electricity is supplied with 100 per cent renewable energy, is a source of pride for us and another turning point in our increasing role in Ford’s electrification strategy,” said Güven Özyurt, general manager of Ford Otosan. “We believe that electrification of the legendary Transit model is a major development and an important step for making Ford Otosan the production base of Ford electrified commercial vehicles.”

Ford had unveiled the E-Transit in November 2020, and the market launch in Europe was planned from the outset for spring 2022 – so here Ford has remained on schedule despite the pandemic and the semiconductor crisis.

Regardless of the body version chosen, the E-Transit has a 77 kWh traction battery, of which 68 kWh can be used. This should be enough for a WLTP range of up to 317 kilometres, although the real range will depend heavily on the chosen version, the load and the driving profile. The battery can be charged with up to 115 kW DC, from 15 to 80 per cent a charging process is said to take 34 minutes. With the 11 kW AC charger, a full charge takes 8.2 hours. Depending on the version, the payload is between 0.7 and 1.6 tonnes, the gross vehicle weight between 3.5 and 4.25 tonnes.

With the start of deliveries in Europe, ‘Ford Pro’ will also be launched. The cloud-based platform is intended to support customers with a range of services – such as uptime, productivity, but also charging of the electric vehicles.

In February, Ford had already started deliveries of the E-Transit from the Kansas City plant in the USA. At that time, Ford put the number of orders for the E-Transit in the USA at over 10,000.

Ford had also recently announced four new electric models in the Transit range: the Transit Custom in the one-tonne van segment and the Tourneo Custom MPV will be launched in 2023. In 2024, the all-electric Transit Courier and Tourneo Courier will follow. The Dransit Custom and Tourneo Custom will also be built in Koaceli. In total, Ford Otosan is investing around two billion euros in the site and plans to hire 3,000 new employees.