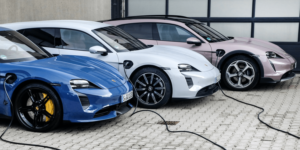 Porsche, the transmission system operator TransnetBW and the consulting company Intelligent Energy System Services (IE2S) have connected five Porsche Taycans to the power grid as buffers – under laboratory conditions, but also in a domestic environment.

Porsche emphasizes that the five Taycans are production-standard vehicles and that the pilot test was realistic. As a spokesperson explained when asked by electrive, the trial was not yet about bidirectional charging but load-dependent control from the grid to the car. “Vehicle-to-grid is conceivable in the future with appropriate modifications to the Taycan,” the spokesperson said.

The test’s technical modification did not occur in the vehicle but in the so-called Porsche Home Energy Manager (HEM), which is already offered today as a control centre for home energy systems. Experts from Porsche Engineering adapted the software of the HEM for the field trial.

The vehicles themselves were connected via the Porsche Mobile Charger using a Type 2 cable; on the infrastructure side, the mobile wall box was connected to the grid via a CEE socket. Using the new software in the Home Energy Manager, the five vehicles were combined into a pool whose power can be regulated as in a virtual power plant – currently, as mentioned, only in one direction. In other words, if the power demand in the local distribution network is higher than the feed-in, thus endangering network stability, the control power of the virtual power plant can be reduced – the HEM then regulates the charging capacity of the connected vehicles accordingly.

“The charging technology of the Porsche Taycan and our Home Energy Manager and Mobile Charger products have a lot of potential for the future: the pilot test proved that,” says Lutz Meschke, Deputy Chairman of the Executive Board and Chief Financial and IT Officer at Porsche AG. Such a pooling system can be used not only for the balancing power market. Porsche suggests that extended solutions for green charging and other vehicle-to-grid applications are equally conceivable.

The underlying cloud-based pooling system which Porsche also calls a swarm, was developed by IE2S. This coordinates the charging processes of electric vehicles. It translates the grid operator’s control power setpoints into vehicle-specific signals that control the charging processes in real-time. In addition, the pooling system controls the high-frequency and time-synchronous bidirectional data transport.

The pooling system was connected to TransnetBW’s main switching line in Wendlingen near Stuttgart on a test basis. As Rainer Plaum, CFO at TransnetBW indicates, this very communication between the control system at TransnetBW and several electric vehicles is very complex. “At the same time, the strict specifications for storing and supplying balancing power have been met. This will enable us to integrate electromobility into the intelligent power grid of the future,” Pflaum says.