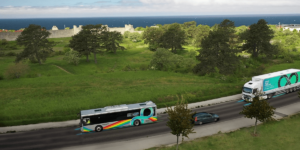 The Israeli company ElectReon, which specialises in inductive charging of electric vehicles, has announced the extension of the Smartroad Gotland pilot project in Sweden by one year and its upgrade.

The two million euro budget for the extension of the project is funded by the Swedish Transport Agency and includes an upgrade of 400 metres of the existing installation. Electreon will also extend the operation of the electric airport shuttle bus.

Smartroad Gotland was launched in 2019 and initially included a 1.6-kilometre route. The first charging tests took place in 2020, and over time both the charging capacity and vehicle speed were gradually increased. Partially, however, the tests only took place on a 200-metre section.

The electric airport shuttle bus, which was first tested in October 2021, is to be further tested and also made available to the public in summer 2022. The new project phase will also test a new generation of ElectReon’s technology. The company has built and commissioned more test tracks since the start of the project in Sweden. In addition, new software that also allows for the billing of inductively charged electricity is to be tested

“The team at Smartroad Gotland is excited for the one year extension of this project and for the opportunity to demonstrate the continued endurance of our wireless charging technology in Swedish weather,” says Håkan Sundelin, Director of the Nordic Region at Electreon and Project Manager for Smartroad Gotland.

Hyundai to include V2G capabilities for their EVs