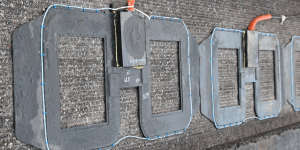 ElectrReon announced the launch of the first fully operational e-bus utilising the company’s wireless charging infrastructure in the city of Visby, Sweden. The Smartroad Gotland project started in 2020 and is one of four Electric Road demonstrators in Sweden.

The Swedish transport authority Trafikverket has been involved since the partners began installing the in-road wireless charging system in late 2019 as reported. Test operations began shortly after on the 1.6-km test section between the airport and Visby city centre on the Swedish island of Gotland. ElectReon in today’s news reports, the fully electric 40-ton truck and trailer the company has been running for nearly a year have since reached speeds up to 80 kph and received an average power of 70 kW from the electrified roadway.

As for the e-bus now serving up and down the Smartroad Gotland, ElectReon had been planning to launch it for a while, following the above tests with trucks. The company has yet to deliver performance data, however.

“As one of ElectReon’s first deployments on public roads, it is exciting to see the Smartroad Gotland project meeting critical milestones,” said Oren Ezer, CEO of ElectReon. “By highlighting how a bus can successfully charge while en route in real-world environments, such as Gotland, it is clear that wireless charging solutions can provide cities with a more convenient, cost-efficient and sustainable way to shift towards an electric future. We look forward to continuing this momentum towards large-scale implementation of our technology on Sweden’s roads,” he said.

As a pre-commercial demonstration project, the Smartroad Gotland project will end in spring 2022. However, with Trafikverket running similar projects in other parts of the country, Sweden is working to commercialise large-scale electric road systems in line with the national target of installing 2,000 km of electric highways by 2030 and achieving net-zero emissions by 2045.

ElectReon has been active in other countries too. The Israeli company recently signed a contract to deliver in-road charging for electric buses by Dan Bus in Tel Aviv. Earlier projects include partners in Italy, France, Belgium or Germany. There, most notably, ElectReon joined the eCharge project by the TU Braunschweig with funding through the German government. The consortium also includes Volkswagen and Eurovia.