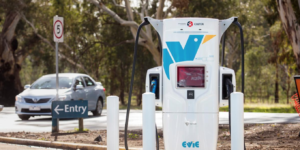 In Australia, Evie Networks has announced new public EV fast charging stations in 55 towns and communities throughout rural and regional Victoria. The 55 Tritium 50kW fast chargers are expected to be operational by mid-2023.

Evie Networks currently operates a total of 58 charging sites across Australia, each typically equipped with two fast (50kW) or ultra-fast (350kW) EV chargers. For the expansion of the network with 55 chargers in 55 Victorian towns Evie says it has placed a multi-million-dollar order for the supply of fast-charging equipment with Brisbane-based Tritium.

In 2019, Evie Networks began building a fast charging network for electric cars on motorways throughout Australia in cooperation with California-based EV Connect. Evie says it has also rolled out charging stations in suburban Melbourne and has plans to expand coverage “throughout the entire Mornington Peninsula-Melbourne-Geelong metropolitan area”.

Allstar joins forces with Allego in the UK