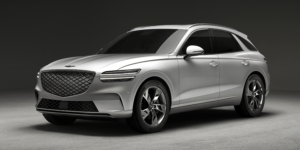 Genesis has now officially confirmed that its Electrified GV70 electric SUV will be produced in the US. Production of the electric vehicle at Hyundai’s Montgomery plant in the US state of Alabama is scheduled to start in December 2022.

The Electrified GV70 is not a pure electric car like the GV60 based on the E-GMP, but an electric version of an internal combustion model. The Electrified GV70 was presented by Genesis in November 2021 at a car show in China. With the location of the premiere and the production plant, two important plants for the large electric SUV have already been named.

“We are pleased to bring Genesis production to the United States for the first time,” said José Muñoz, president and CEO of Genesis Motor North America. “The GV70 SUV has won the hearts and minds of American consumers and industry experts alike. We are proud to begin offering consumers the new electrified model, built right here in America.”

Genesis does not cite reasons for the delay – volatile supply chains likely played a role – in the release. The production of the Electrified GV70 is only mentioned in a few sentences there, because it is actually about the presentation of the “X Speedium Coupé” concept

This is supposed to give a preview of the design language of future electric models of the Hyundai brand. “This car is an open-door moment in Genesis’ journey towards our future EV design,” said Luc Donckerwolke, Genesis’ chief creative officer. “This isn’t a show car — it’s a look into our design processes as we explore ideas for the next wave of EVs, one that incorporates Genesis’ DNA.”

Characteristic elements such as the ‘Two Lines’ headlights and taillights remain, but have been reinterpreted. For example, the two lines of the headlights extend from the implied front grille well into the sides – even to the front doors. Even though Genesis emphasises that this is not a study of a planned production model, the front design is likely to appear in later production models: The press release says the concept wears “an EV face that symbolises Genesis’ transformation into an all-electric car brand with a product range of six models by 2030”.

Production resumes at the Shanghai Gigafactory