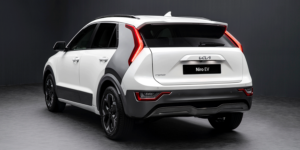 Kia has revealed pricing and specification details in the UK for the new Kia Niro. Customer pre-orders for the second-generation open today.

The Korean carmaker has introduced three grades of ‘2’, ‘3’, and ‘4’ for each variant which come as BEV, PHEV and HEV. Kia has put a price rise of £2,750 between each trim level for all three models.

In terms of its optics, the second generation has shed the somewhat conservative look and follows the current and more expressive Kia design philosophy “Opposites United”. The headlights with LED daytime running lights are completely new and striking, and the rear with the now upright tail lights is no longer reminiscent of the predecessor. On the sides of the body, there are elements painted in a contrasting colour as an option.

One change with the new models affect both the PHEV and the HEV: the six-speed dual-clutch gearbox is just that: a six-speed gearbox. The mechanical reverse gear has been removed. In future, the two hybrid variants will only shift in reverse purely electrically. There is no longer a mechanical gear system. Incidentally, both hybrid versions are allowed to tow 1,300 kilograms when braked.

In the case of the HEV, that’s it for the hardware changes. The petrol engine produces 77 kW, the electric motor a maximum of 32 kW. But this is only for a very short distance, because the battery still holds less than two kWh. Both hybrids also have so-called “GreenDrive Zones” in which they automatically switch to electric mode. In addition to predefined zones such as environmental zones, users can also set up their own zones, for example in their own residential area or around their children’s school.