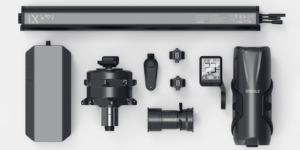 Mahle Smart Bike Systems has launched the new e-bike drive X20. The company claims it is the lightest drive system for e-bikes as it weighs just 3.2 kilograms, including the battery.

Mahle has opted for a rear hub approach. In the X20, the hub motor weighs just 1.4 kilograms. According to the e-bike subsidiary of the automotive supplier, the motor can be separated from the rear wheel with a click so that users can remove the rear wheel themselves without specialist knowledge or special tools.

What is more, Mahle opted for performance and said the drive delivers 23 Nm on the wheel. Mahle calculates that a mid-motor with 55 Nm of torque would be necessary for the same driving performance. These usually weigh more.

However, cue in Fazua. The small company based in Munich has been specialising in lightweight drive systems for pedelecs since 2013. Porsche took a stake in them this February and is open to taking over entirely. Fazua claims that over 40 brands rely on their technologies, including Bianchi, Cube, Pinarello, and Focus.

The Fazua evation system integrates the motor inside the bottom bracket and hides the battery inside the frame, making it only slightly bigger. Overall, the drive weighs in with no more than 1.5 kilos, excluding the battery for a range of 50 km.

Competition aside, the Mahle X20 drive can be combined with two battery sizes that are also integrated into the down tube. Mahle does not mention the data and ranges in the announcement, but from the model designations iX250 and iX350, 250 and 350 Wh of energy content can be deduced, respectively.

There is also the option for a range extender in the form of a water bottle that can be attached in a similar fashion to the frame. It weighs one kilo and can double up as a power bank to charge external devices.

Mahle also mentions a “sophisticated sensor package” that measures acceleration, speed, torque, temperature and pedalling rate. It also uses artificial intelligence to continuously adapt the drive to the person in the saddle so the supplier.

What remains unclear is whether the system is supposed to be offered as a retrofit option to consumers directly. The easy attachment suggests as much. At the same time, the frame integrated battery indicates otherwise.

After Brose and most prominently Bosch, Mahle is another automotive supplier moving further into the e-bike segment.

Production of the new X20 traction motor for e-bikes has started at the Mahle site in Šempeter pri Gorici, Slovenia. Around 20 employees are currently building the new drive on the new production line that went into operation this year. The first deliveries to customers have already been made.

“We are delighted that the industrialization of the X20 has gone so smoothly and that we have already been able to deliver the first e-bike motors from Šempeter to our customers,” said Dr. Armin Messerer, Vice President Mechatronics, who is also responsible for the E-Bike Drive Systems division at MAHLE. “With our X20 drive system, which can be installed virtually invisibly in the frame and hub, we are offering our customers a top-class product that sets a new benchmark in terms of power-to-weight ratio.”