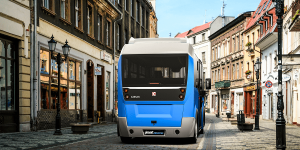 Turkish electric bus manufacturer Karsan has booked further orders from Romania and Italy. A total of 16 e-buses are to be delivered to the Romanian city of Focsani and 42 units to Italian operations.

The Romanian city of Focsani has ordered nine units of the e-Atak model and seven of the e-Jest model. Both are electric minibuses for which the company is renowned. Karsan says it has received orders for 104 electric vehicles from Romania. By the end of the year, the fleet on Romanian roads will be expanded to 180 vehicles. Last year, the city of Deva ordered 26 electric buses from Karsan as reported.

However, the orders from Italy represent the Turkish manufacturer’s market entry into the southern European country. They stem from a framework agreement for 80 e-Ataks signed last year with Rome-based procurement company Consip. Under this agreement, Karsan says it has now received orders from seven different operators for 38 e-Ataks, which are also due to arrive by the end of this year. The statement did not list the cities or operators expecting the new buses from Karsan.

Only Cagliari was named, where the Turkish bus builder is to deliver four e-Ataks, bringing the total order volume to 42 units.

“Italy is one of our most important focus markets,” says Okan Baş, CEO of Karsan. “The 42 e-ATAK orders we have received so far are the first steps towards achieving growth in this market.” He added that 2022 was to be a year of entering new markets and doubling sales.

The e-ATA range, offered in lengths of ten, twelve and 18 metres, is Karsan’s first move away from minibuses. Production is set in Turkey. Unlike the e-Jest and e-Atak models for which Karsan utilises BMW i3 batteries, the e-ATA line comes with LFP cells.