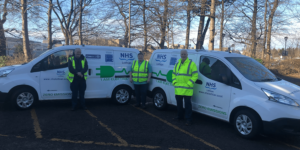 NHS Lothian in Scotland has invested over half a million pounds into its electric fleet. £525,000 recently bought the National Health Service in Lothian 58 electric vehicles and 46 charging stations and brought up fleet electrification to 25 per cent.

“Climate change is the biggest threat to global health, and it’s vital that we adapt to it as an organisation, not just as individuals,” says NHS Lothian Transport Manager Iain Sneddon. “Electric vehicles are the preference when we’re looking to grow our fleet or replace vehicles. Not only are they a cleaner alternative, but they have the added benefit of being more cost-effective.”

NHS Lothian is in line with a national effort by the British health service to decrease their emissions.

It is also working on zero-emission ambulances together with Ford and the Venari Group to develop a corresponding vehicle based on the Ford Transit as reported.