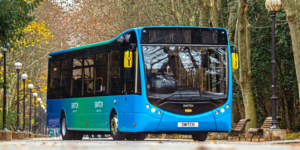 Switch Mobility has announced plans to invest £300Mn across the UK and India to develop its electric buses and light commercial vehicles. The British subsidiary of India’s Ashok Leyland has similar targets for Europe, where a new facility is under construction in Spain.

Switch Mobility took a visit by British Prime Minister Boris Johnson to India as the opportunity to announce the news. It also coincided with the company launching its new electric bus made for the Indian market. Switch claims it is holding an order bank of nearly 600 electric buses in the country.

“We are committed to rolling out next-generation clean green buses in the UK, and Switch Mobility is at the forefront of that revolution,” Johnson said. He added that the investment would bring “high-quality jobs and skills to both the UK and India and is a testament to our partnership in the industries of the future.”

The company, formerly Optare, expects to create over 4,000 skilled jobs in the UK and India as part of the investment.

Led by Andy Palmer, the former COO of Nissan and CEO of Aston Martin Lagonda, Switch also published plans for a Technical Centre to be opened in Warwick, UK, this June. Switch expects the centre to become “the focal point” of its global R&D team. In the UK, 130 staff led by Chief Technology Officer, Roger Blakey, will also work closely with Switch’s existing R&D offices in Chennai, Leeds and Valladolid, employing 200 engineers.

For the plans in Europe mentioned before, Switch has budgeted around 100 million euros to build its first plant in continental Europe over the next ten years. Construction has started with Switch targeting Q4 2022 to produce the first vehicles.

Switch CEO Palmer expects the new facility to provide “decisive access to the European market”. In addition to manufacturing electric vehicles for the European market, the site will initially focus on research and development for the next generation of electric buses and light commercial vehicles. It is, however, to supply markets further afield, including South America, eventually.

However, it looks like the plants will mostly be charged with assembly. The US automotive supplier Dana has been Switch Mobility’s preferred supplier reportedly since last October. Dana will supply e-components such as e-axles, transmissions, motors, inverters, software and controls, and electronic cooling systems to the UK. At the same time, the US company has made a strategic investment in Switch Mobility. The partners have agreed not to disclose the amount.

Optare was renamed Switch Mobility in late 2020 to highlight its focus on sustainable transport. Commenting on the rebranding at the time, Ashok Leyland Chairman Dheeraj Hinduja said: “Optare is adopting a new identity and logo as Switch, signalling our strategic ambitions in electric and green mobility.

Ashok Leyland is a commercial vehicle manufacturer, part of the Hinduja Group, based in Chennai, India. In 2010, Leyland acquired a 26 per cent stake in UK bus manufacturer Optare, which moved to a newly built plant in Sherburn-in-Elmet shortly after. In 2017, Ashok Leyland bought out a further 72 per cent of Optare, which amounted to an almost complete takeover.