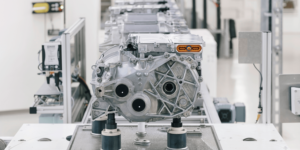 In Germany, Volkswagen Group Components has announced plans to expand its site in Kassel into a “key supplier for e-mobility”. The first step is to increase the number of production lines. The longer term plan is for the plant to only manufacture purely electric vehicles.

The group’s planning round in December indicated that the plant would accelerate the transformation started in 2015 and “focus the product portfolio at full speed on tech components for electric cars”. The number of the current 18 production lines for e-motors and other e-components is to be doubled over the next four years.

VW Group Components lays out a clear future for the plant as a “key supplier of e-mobility”.  In the long term, no more combustion engine components are to be produced in Kassel. Instead, Kassel is to become the group-wide competence centre for e-drives – much like the carmaker’s Salzgitter plant is for battery cells.

Volkswagen and Audi brands will develop and probably also produce the e-drive for the future e-platform Scalable Systems Platform (SSP) in Kassel. Numerous components for the current MEB vehicles are also produced in the plant, for example, the rear electric motor (with rotor and stator from the Salzgitter plant), the single-speed gearbox and castings such as the intermediate housing. The first start-up of the first pulse inverter developed in-house for the MEB at the site is planned for 2025. According to VW, innovative manufacturing processes developed at the site have been used for its industrialisation.

However, it is not only the assembly of the E-components that is to be expanded, but also the light metal foundry for the SSP. Volkswagen says that “innovative process for casting structural parts on existing equipment” has been developed – in short, that large components are to be produced on medium-sized equipment. This involves a casting for a rear vehicle that replaces 33 individual parts compared to conventional body production.

Volkswagen Group Components is investing around 1.2 billion euros in the site by 2026 to expand it into a centre of excellence, with more than two-thirds of the sum being spent on the development and production of e-components.

“Kassel has mastered the transformation to date with great competence and courage – and on this basis will become Volkswagen’s e-motor centre of the future!” says Thomas Schmall, Group Board Member for Technology and CEO of Volkswagen Group Components. “The focus is on the e-drive train with the future in-house development and production of the pulse inverter. After all, this will decisively define the efficiency and range of the electric car. With our tech components for the upcoming SSP platform, we want to achieve the best overall system efficiency.”

Group Human Resources Director Gunnar Kilian adds: “Overall, the site is ideally positioned for the future. This is well founded with the excellently qualified team, their great commitment and a forward-looking product and production depth.” Daniela Cavallo, Chairwoman of the Group and General Works Councils, is also full of praise: “The colleagues in Kassel are consistently driving innovations in the direction of electromobility and are shaping the transformation together.”

Kassel is the largest component plant of the VW Group and employs around 16,000 people. The first e-drives for the e-Up were manufactured in 2015. In the meantime, a quarter of the workforce is employed in e-mobility. Currently, the electric drives for the MEB models in Europe and North America are built in Kassel – VW has set up its own supply chain for the MEB plants in China.