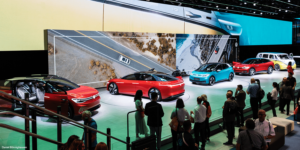 This means that for the first time, more than half of the total investment would be in future technologies, as the Chairman of the Supervisory Board Hans-Dieter Pötsch indicated right at the beginning of the press conference. This will now be 56 per cent instead of 50 per cent in the previous planning round. “The financial starting point is extremely solid and robust,” said Pötsch. “Among the central points we have decided on is the complete electrification of the European locations.”

More on the city locations in a moment – the supervisory board meeting also decided on a comprehensive reorganisation of the group’s executive board. According to Pötsch, this is a “personnel and structural reinforcement” “in order to be prepared for the next phase of the transformation”. The personnel decisions have turned out as leaked in advance: Herbert Diess remains chairman of the board, but has had to hand over some of his responsibilities.

VW brand chief Ralf Brandstätter will join the group’s board of management and take over responsibility for the China business from August 2022. He will be succeeded as CEO of the core brand by Skoda boss Thomas Schäfer. It is not yet known who will succeed him in Mlada Boleslav.

Pötsch: Diess is the “engine of change

In addition, Manfred Döss will take over the Integrity and Legal Affairs department from Hiltrud Werner. Former Deutsche Börse board member Hauke Stars will take over the newly created IT department, and Audi’s board member for marketing and sales, Hildegard Wortmann, will in future also be in charge of sales at the Group level. The contract with Gunnar Kilian, who is responsible for Human Resources and Truck & Bus and runs until April 2023, will be extended by several years.

According to Pötsch, Diess will pay “even more attention” to the software subsidiary Cariad in order to develop future profit pools. Diess will also retain responsibility for the volume group in the group, including strategy, but also validity, design and communication, at least until next summer. Pötsch described Diess as the “engine of change”.

Diess himself stated at the press conference that he feels strengthened by the new appointments to the board. “I cannot complain about a lack of responsibility,” said Diess. “Now we are further strengthening the Executive Board and will consistently focus on transformation.”

ID.3 will also be built in Wolfsburg in future

Commenting on the dispute, particularly about the Wolfsburg site, Diess said: “For a long time I was worried that we were not tackling the change consistently enough. Now we have decided on a comprehensive package, we will not recognise Wolfsburg in ten years’ time,” said the CEO. “I am now much more confident that we will manage the transformation and the competition. And that we will recognize the new competition, we have made sure of that.”

The package for Wolfsburg does not just include the production of the flagship electric vehicle ‘Trinity’, which will be built at a new plant near the current factory site from 2026. “Ms Cavallo has personally lobbied for an electric vehicle to be produced in Wolfsburg before then,” said Diess, referring to works council chairwoman Daniela Cavallo. Cavallo got her way: Partial production of the ID.3 will start in 2023 (with deliveries from Zwickau), followed by full production in 2024. This means that the ID.3 will also be manufactured in a second plant in addition to Zwickau. “This plan will allow the Group to service additional market volumes that Zwickau alone would be unable to handle due to the good long-term capacity utilisation forecasts,” the company adds.

In total, Volkswagen will invest 21 billion euros in the Lower Saxony plants as part of the planning round from 2022 to 2026 – one billion euros of which will go to the Trinity plant alone. Two billion will be invested in the battery factory in Salzgitter. The MEB component production in Salzgitter and Braunschweig as well as in Kassel in Hesse will also be expanded. In addition, the sites are preparing for the production of components for the SSP platform.

At the Salzgitter plant, the supervisory board has approved the establishment of a new SE (Societas Europaea, a public company registered in accordance with the corporate law of the European Union) for the battery business. The group’s “battery-related activities” are to be bundled in this company, in which third parties will also be able to participate financially in the future. The battery partnerships announced this week with Umicore, 24M and Vulcan Energy will then also run through this SE.

The supervisory board has not yet made a decision on the Osnabrück plant, for which an electric convertible was recently under discussion. “It was agreed that a future production program for the Osnabrück site and a secondary use concept for Dresden would be considered in Planning Round 71,” which will take place in November 2022.

In addition to the production of MEB axles and the ID. Buzz, the production of the Artemis Audi. For the corresponding Bentley, only the body will be produced there, as Porsche will build its Artemis vehicle in-house.

Audi plant in Neckarsulm to be upgraded for EV production

This could be in Leipzig, as Diess mentioned two electric vehicle models for the Saxony site – so far only the electric Macan successor has been confirmed there. Audi’s Neckarsulm site is also being electrified: The E6 is to be built there – presumably the production version of the PPE-based electric car A6 e-tron shown as a concept in April. And as already confirmed by Audi boss Markus Duesmann: The Q8 e-tron will be built at the Brussels plant as the successor to the e-tron quattro.

In the Spanish plants, as expected, VW is aiming to produce small electric cars at the Martorell plant. Electric SUVs are to be built in Pamplona; Diess did not specify brands or concrete models at the press conference. However, both locations are still “under review”, a decision also depends on funding commitments.

With all these measures, 25 per cent of all Volkswagen cars built worldwide will be battery-electric by 2026, “according to plan”, as Pötsch emphasised. Diess forecasts an operating return on sales of eight to nine per cent for 2025/2026 – in 2021, with around nine million vehicles, the company will end up “at the upper end” of the margin range of six to 7.5 per cent, he said.

There was no mention of possible job cuts at the press conference or in the announcements. However, Diess, who is satisfied with the results, adds: “We can only manage this transformation of the century if we work efficiently.

But Diess is not the only one who is satisfied. “Looking at the planning round, I can state with satisfaction: The transformation is in full swing at our sites,” says works council member Cavallo in her statement. “Volkswagen is serious about transformation and is setting the course for it.”

Cavallo nevertheless warns of a lean period, not only in the current year but also in 2022. “In 2021 we will not build 400,000 vehicles in Wolfsburg,” says Cavallo. “Semiconductors will also be in problem in 2022. The planning round is really something to behold. It shows exactly the right course. But the coming months will be tough.”

Has the management dispute now been settled? At the works meeting in November, Cavallo had sharply criticised Diess and above all reproached him for his “fascination” with Tesla and Elon Musk. At least on this point of conflict, Diess appears to have reformed – at least somewhat. He does not mention the word Tesla at the press conference, even when asked directly. Instead, he speaks of “an American manufacturer who is building a plant near Berlin”.