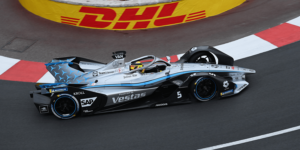 Mercedes driver Stoffel Vandoorne won the Monaco E-Prix, the sixth race of the 2022 Formula E World Championship season, on Saturday to claim his first victory of the season. Mercedes-EQ thus extends its lead in the team championship.

On the street circuit in the Principality, the Belgian beat Mitch Evans (Jaguar) and Jean-Eric Vergne (DS Techeetah), who finished 2nd and 3rd respectively. Formula E used the familiar Formula 1 circuit and not a short circuit as in previous years.

The race started with a good starting position for the German manufacturers: Both the Mercedes and the two Porsche 99X Electric cars of Pascal Wehrlein and André Lotterer qualified among the top six. While Mercedes driver Vandoorne was able to win the race after numerous lead changes thanks to good energy management and skilful use of the “Attack Mode”, Porsche experienced a bitter race Saturday: Wehrlein retired in the lead with a defect, Lotterer was pushed into the wall after an overzealous overtaking attempt by Oliver Rowland in the Mahindra exit turn 1 and also had to retire from the race.

“I’ve had a couple of pole positions, but I couldn’t convert them into wins,” said Vandoorne after the race. “So this weekend I thought I would not go for pole and win the race instead. The tactic worked.”

Jaguar driver Mitch Evans, who had still won both races at the doubleheader in Rome, was satisfied with second place in the end, but was also self-critical. “I thought we were going to be pretty good on the drive side,” said Evans. “But we weren’t. I was lucky to have finished second. I’ll take that with me, on to the next race.” In a fortnight’s time, Berlin will once again host a doubleheader at the former Tempelhof Airport, meaning one race each on Saturday and Sunday.

With two-time Formula E champion Jean Eric Vergne in the DS Techeetah in third and Robin Frijns in the Envision Virgin in fourth, four drivers are already emerging who have scored regularly not only in Monaco but also in the other races – consistency is particularly important in Formula E. Thanks to the victory, Vandoorne takes the lead in the drivers’ standings with 81 points, ahead of Jean-Eric Vergne (DS Techeetah) with 75 points. Evans (72 points) and Frijns (71 points) follow close behind. A gap has already opened up to the championship leader Edoarto Mortara (Rokit Venturi) with 49 points and the two Porsche drivers Lotterer (43 points) and Wehrlein (42 points). Last year’s champion and the winner of the opening race Nyck de Vries in the second Mercedes-EQ is eighth with 39 points.

The Mercedes-EQ team leads the team standings after the sixth round of the season with 120 points ahead of DS Techeetah (105 points) and Jaguar (94 points). Porsche has dropped to sixth due to the double retirement in Monaco, but is only one and two points behind Rockit Venturi and Envision Virgin respectively.

In the run-up to the e-Prix in Monaco, Formula E had also unveiled the so-called Gen3 racing car, which will be used from the coming season. The cars will have a new look and significantly more power. We have summarised all the details here.