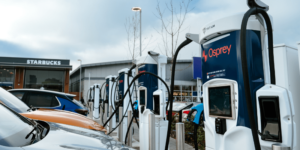 Tritium has announced a deal to supply over 250 rapid chargers to the Osprey Charging Network. The 150 kW chargers will equip 100 new locations and expand Osprey’s UK network by 50 per cent. The move follows Osprey’s December 2021 announcement of ordering another 100 Tritium chargers.

The news comes shortly after the release of a new EV charging network strategy set out by the UK government in March, aiming to expand the country’s charging network to 300,000 by 2030. To achieve this goal, it is investing 1.6 billion pounds.

Tritium quotes other figures of 190,727 new electric vehicles sold in the UK last year – “a staggering increase of 76% compared to 2020,” so the company. “We’re delighted to strengthen our relationship and key partnership with Osprey to support their infrastructure coverage goals and increase access to rapid charging,” adds Jane Hunter, Tritium CEO.

Osprey has been working with Tritium since April 2021, when Osprey announced the installation of its first RTM75 charger and followed with another 100 Tritium chargers in December that year. Osprey’s announcement today to deploy an additional 250 Tritium chargers illustrated “the relationship growth that is occurring with Tritium’s most valued customers,” so the Australian manufacturer.

It also means Osprey is stepping up from the 75 kW delivered by the RTM line to the 150 kW the PKM series can provide.

Osprey plans to roll out 150 rapid charging hubs by 2024 as part of a £75 million investment programme.