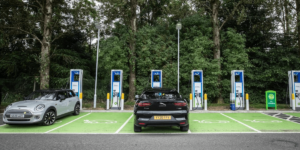 The British government wants to increase the number of public charging points for electric vehicles in the UK to 300,000 by 2030. To achieve this goal, it is investing a total of 1.6 billion pounds.

For electric car drivers, the strategy of the government under Prime Minister Boris Johnson aims to make charging electric vehicles easier and cheaper than refuelling petrol or diesel vehicles. New legal requirements for operators are to ensure that they can make contactless payments, compare charging prices and find charging stations near them via apps.

The government also wants to continue to remove barriers to the introduction of charging stations in the private sector. The plans also aim to reduce the UK’s dependence on foreign oil imports, improve energy security and reduce the country’s vulnerability to volatility in global energy prices.

The £950 million Rapid Charging Fund will also support the roll-out of at least 6,000 rapid charging points on England’s motorways by 2035. Other private actors, such as Uber, have also made investments to help bring charging options to British streets. At the same time, the ULEZ continues to be expanded from the heart of London with positive results.

In addition, BP, which operates most of the UK’s charging stations, is announcing its own plan to invest £1 billion over the next ten years to expand its BP Pulse charging network. In particular, it aims to accelerate the roll-out of HPC connections and also create new jobs.

“We’re powering ahead with plans to help British people go electric, with our expanding charging network making journeys easier right across the country,” said prime minister Boris Johnson, adding: “Clean transport isn’t just better for the environment, but is another way we can drive down our dependence on external energy supplies. It will also create new high-skilled jobs for our automotive and energy sectors and ultimately secure more sustainable and affordable motoring for all.”

No new combustion vehicles in Washington State by 2030