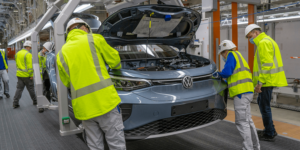 The VW ID.4 is now also being produced in Emden. This means that the ID.4 is now built at the German sites in Zwickau and Emden as well as in the Chinese plants in Anting and Foshan. From autumn this year, production for the US market will start in Chattanooga.

According to Wolfsburg, Emden is the first high-tech location for electric mobility in Lower Saxony. VW invested around one billion euros in the conversion of the plant so that electric cars can roll off the assembly line there. VW plans to invest a total of 21 billion euros in the federal state by 2026.

The conversion phase lasted two years. Although there were global challenges, VW stayed on schedule with its project. Six new production halls and logistics buildings as well as five new conveyor bridges with a total of about 125,000 square metres were built in the course of the plant conversion. Production-related and virtual training courses were held and there was also an excursion with the VW site in Zwickau. Since spring 2020, more than 400 employees from Emden are said to have been deployed in Zwickau to prepare for the production of e-vehicles.

“Rapid expansion of production capacities for our successful ID.4 model is a key component of our ACCELERATE strategy,” says Volkswagen CEO Ralf Brandstätter. “It helps us accelerate the transformation to zero-carbon mobility and create further capacities to meet the high demand for electric vehicles.”

According to Brandstätter, Volkswagen employs 130,000 people in Lower Saxony. Following the ID.4 with the Aero B as a saloon and as a Variant, further EV models are to be produced in Emden next year and the year after. “In addition, production of the iconic ID. Buzz will commence this year at Volkswagen Commercial Vehicles in Hanover. It will be joined from 2023 on by the ID.3 made in Wolfsburg, while a further electric vehicle – the Trinity – will then roll off the assembly line at the location starting in 2026,” Brandstätter continued.

“The consistent expansion of the production network is key for the success of our global electric offensive,” explains Christian Vollmer, Member of the Board of Management for Production and Logistics at the Volkswagen brand. “With the knowledge and experience gained in Emden, we will be able to drive the transformation of other plants quickly and efficiently.”

According to VW, the ID.4 quickly became a successful model after its market launch: In the first quarter of 2022, the group delivered more than 30,000 vehicles of the model. A total of 163,000 vehicles have been delivered worldwide since its market launch last year – “making the ID.4 the best-selling electric vehicle of both the Volkswagen brand and the Volkswagen Group”. There are currently around 73,000 orders for the model worldwide.