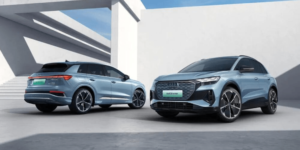 A few days after the market launch of the Audi Q5 e-tron built by SAIC Volkswagen, pre-sales of the Audi Q4 e-tron from FAW Audi are now also starting on the Chinese market.

The Ingolstadt company will only offer the Q4 in China in the Q4 40 e-tron and Q4 50 e-tron quattro variants. The 40 e-tron is powered by an electric motor in the rear with an output of 150 kW. The 50 e-tron quattro is a four-wheel drive with a maximum output of 220 kW. The top speed is also 160 km/h, just like in this country.

However, there is a difference with the battery. In Europe, the chemical storage unit has a usable energy content of 76.6 kWh. For the Chinese market, on the other hand, it has a capacity of 79.7 kWh, which, according to Chinese standards, should allow a range of up to 605 kilometres. The battery cells with the NCM 811 chemistry come from CATL. There are also differences in the charging time from 5 to 80 per cent: the Q4 40 e-tron takes 29 minutes and the Q4 50 e-tron quattro 36 minutes for the European versions. In China, however, both variants need a full 41 minutes for the charging process.

The Q5 e-tron has also been available on the Chinese market for a few days. The electric SUV, which is based on the MEB platform of the Volkswagen Group, is offered at prices between 376,500 and 479,500 yuan (currently around 53,000 to 67,500 euros), depending on the variant.

While Volkswagen is reportedly considering importing the sister model ID.6 to Europe, this seems to be out of the question for the Audi Q5 e-tron.

Lancia to go fully electric from 2026