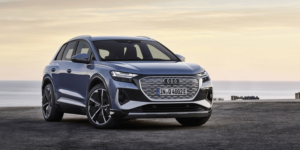 Following VW and Skoda, Audi is also bringing several updates to its MEB model Q4 e-tron. In addition to the well-known shorter charging time for the variants with a large battery, Audi is bringing a number of new equipment scopes to the MEB SUV.

The Q4 e-tron and Q4 Sportback e-tron models with the large 82 kWh battery (net usable 76.6 kWh) will receive the charging update to a peak output of 135 kW DC for the model year 2022. As with Skoda and Volkswagen, however, it depends on the exact drive version how big the time savings with the charging update actually are: The all-wheel-drive models also have an 82 kWh battery, but they use cells from a different supplier and thus differ in terms of charging performance.

Only the Q4 40 e-tron and the associated Sportback (150 kW drive power, rear-wheel-drive) shorten the standard charging process to 80 per cent in the ideal case to 29 minutes. For the all-wheel-drive Q4 45 e-tron quattro (195 kW) and the 220 kW Q4 50 e-tron quattro (only the latter is also available as a Sportback), the charging process is only minimally reduced to 36 minutes. The Q4 35 e-tron with the smaller battery (58 kWh, 125 kW drive power) does not receive a higher charging rate. According to the auto release, the charging update was achieved through optimized software for thermal management and battery control.

In addition, the Q4 e-tron and Q4 Sportback e-tron receive a number of new equipment features with the new model year. One new feature, for example, is the ‘black plus optics package’ with some black accents on the body, and the black instead of chrome model designation can now be ordered for all Q4 e-tron models – previously this was only the case for the ‘Edition One’.

There are also changes in the interior. An 11.6-inch MMI touchscreen can now be ordered as an option. The software has also been adapted, and the ‘Audi connect’ system now supports personal user profiles in the vehicle, options for last-mile navigation and extended app functions for vehicle status and parking position. And Audi has now integrated Amazon’s voice assistant Alexa, which can be used to manage the calendar or shopping list by voice if desired, as well as to control compatible smart home devices from the vehicle.

The ‘myAudi’ app has also been adapted and expanded to include some eMobility functions. If you send pre-planned routes to the vehicle via the app, charging stops are automatically scheduled based on the current traffic situation and the customer’s individual consumption. In addition, a charging destination can be set via the app, and the smartphone can send a push notification when the desired charging status is reached.