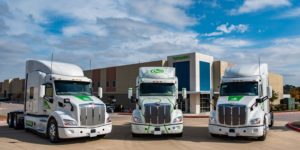 The US company Hyliion, which specialises in electrified drives for heavy commercial vehicles, has received an order from the building materials producer Holcim. Holcim is ordering ten examples of the Hypertruck ERX.

As reported, this is a heavy-duty truck with an electric drive is combined with a generator powered by natural gas to charge the battery. Holcim plans to use the Hyliion trucks in its operations in Texas and Oklahoma, where they will replace existing diesel trucks.

The Hypertruck ERX is a Class 8 truck, meaning it weighs more than 14.969 tonnes. The total range with the natural gas range extender is said to be 1,000 miles, or 1,609 kilometres. With the buffer battery charged, it is only 40 kilometres. The German service provider FEV is also involved in the development.

As Hyliion says, Holcim placed the order after a visit to Hyliion’s headquarters. During the visit, not only was the vehicle demonstrated, the executives were also able to gain “a deeper understanding of how the Hypertruck ERX could enable a reduction in their transport carbon footprint”.