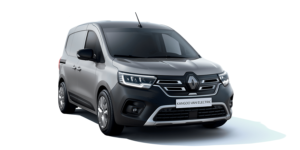 Renault has released further details of the Kangoo Rapid E-Tech Electric, which will be launched in Europe in spring 2022. Like its predecessor, the compact van will be offered in two length variants that offer the same storage volume and payload as their conventionally powered counterparts.

The French manufacturer presented the new Kangoo Rapid in spring. While the revised van is already on the market as a combustion engine model, the fully electric variant will go on sale in spring 2022.

The most important key data on the new Kangoo Rapid E-Tech Electric: it is powered by a 90 kW and 245 Nm electric motor and draws its energy from a 45 kWh lithium-ion battery installed in the underbody, which is supposed to allow a range of around 300 kilometres. These values differ from the performance data announced in the spring: At the time, there was talk of a 75 kW engine, a 44 kWh battery and a range of up to 265 kilometres. It seems that Renault has been working on the concept for the past six months.

Regarding the charging power, Renault states that the electric transporter charges with 11 kW AC as standard. An AC charging capacity of 22 kW and a DC fast charging function of 75 kW are also available as options. At a fast-charging station with the corresponding power, the battery should be able to recharge for 150 kilometres in 30 minutes. According to Renault, a full charge takes 4:30 hours at an 11 kW AC charging point and just under seven hours at 7.4 kW. Renault does not provide any information on the duration of the 22 kW charging process.

For this, the French company emphasises the introduction of six driving programmes, including an Eco mode for range optimisation, which limits the power output. In the spring, the carmaker specified that the power output in Eco mode is throttled to 55 kW. Whether this is still current is not clear from the current announcement. Another driving programme (“B mode”) enables one-pedal driving, in which one pedal can be used to accelerate as well as to actively brake via strong recuperation.

The electric transporter’s features include “the widest side loading opening in the compact van class”, which covers 1.45 metres and has been achieved by integrating the B-pillar into the sliding door and passenger door on the right-hand side of the van, Renault says. There is also a retractable interior gallery, which should allow the transport of long objects such as ladders or pipes at the top of the vehicle.

In addition, according to Renault, there is an interior climate control system coupled to a heat pump, which draws most of the energy for heating and cooling from the ambient air rather than from the battery. In addition, a windscreen heating system, heated front seats and a heated steering wheel can be ordered as options. The electric Kangoo Rapid also comes with Renault’s Easy Link online multimedia system via an 8-inch display, a keyless entry and start system and the option of folding down the backrest of the middle seat to create a versatile work surface (“mobile office”). Driving assistance features include adaptive cruise control with stop & go function and a motorway assistant.

Like its predecessors, the new city van will be manufactured at the French site in Maubeuge. Renault has not yet announced prices. By the way, there will also be a passenger car version of the Kangoo Rapid. It is not yet known whether this version will have different technical specifications.

There will also be a Mercedes-Benz version of the Kangoo: As a commercial vehicle, this will be the new edition of the Citan presented in August, the electric passenger car variant will be called EQT. The German company had already shown a Concept EQT, but it was considerably longer at 4.95 metres. Technical data were not available at the time.