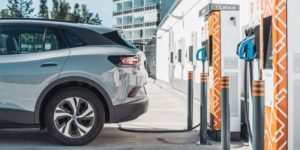 The Finnish retail group Kesko wants to nearly double its charging network for electric cars to a total of about 200 locations this year. The charging network, operated by the offshoot K-Auto under the label K-Charging, currently comprises 107 locations throughout Finland.

The sites – whether new or upgraded – will then each have two 200 kW charging columns with two charging points. “The number of electric cars is growing all the time, and about a third of the new cars sold by K-Auto, for example, are already fully electric cars,” says Tom von Bonsdorff, the board member responsible for K-Charging. “As a result, demand at the most popular charging stations has increased significantly, and by renewing the stations we are also ensuring sufficient capacity in the future.” There are also plans to increase the number of charging stations at the branches of the DIY chain K-Raudo in the future.

Kesko began building its own charging network at its locations in mid-2018. The retailer is also a partner of Ionity: the fast-charging joint venture has built several HPC parks at locations near motorways.

Freewire signs LoI for EV charging scheme in the US