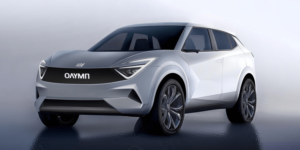 Olymp Cars is a new electric car brand. The company from Vienna is planning a series of vehicles with model names from Greek mythology based on its own platform called Hephaistos. The first vehicles are to be presented in spring 2023.

According to information on the company’s website, the first vehicle will probably be the Hermes e-transporter, which is to offer a range of 700 kilometres. Production of this model is scheduled to start in mid-2023, writes “motor.at”, which spoke to one of the co-founders. Also planned are the 4.80-metre electric SUV Ares with a range of at least 600 kilometres, the sedans Apollon and Athena including a shooting-brake offshoot, the electric pickup Artemis, the electric family van Hera and an electric city car called Selene. Later, the models will also be hydrogen-powered. So far, there is only a rendering of the SUV Ares.

The Hephaistos platform is reportedly scalable and can accommodate different battery sizes. The range is between 450 and 700 kilometres and the power output is up to 257 kW (original specification: 350 hp), the report continues.

According to the Austrian publication motor.at, the companies behind the company are abo-drive and Modern Mobility. “Above all, we want to offer our customers affordable and affordable electric cars that are manufactured with German or Austrian quality,” Elias Skodras is quoted as saying. The CEO of Modern Mobility explains that Olymp Cars is not a car manufacturer, but they have taken the development of the vehicles into their own hands – with the help of appropriate experts. The designer has already worked for Volvo and Porsche. The company wants to be European, but the batteries come from China, they say.

The company already has a partner in Germany for the production of the van, one in Italy for the small car and the Ares is to be built in Austria if possible – but Olymp does not name the potential contract manufacturers. With regard to distribution, the company is considering a subscription model, direct sales and also leasing models. Second-life use of the vehicles is also planned.