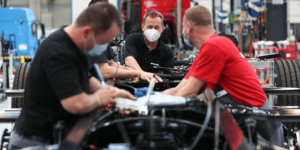 Traton subsidiary MAN is on schedule with preparations for large-scale production of electric trucks at its Munich plant. In the first twelve months since the eMobility Centre was established at its main plant, MAN Truck & Bus has launched 20 prototypes of the upcoming heavy-duty electric truck.

Even more important than building the vehicles themselves: As MAN announced on the occasion of the eMobility Centre’s first anniversary, this allowed the future mixed series production with conventional trucks to be tested under real conditions. With the installation of components such as the battery, electric motor and high-voltage components and cables, the construction of an electric truck differs from diesel vehicles – which requires new production processes.

A separate production line for electric trucks is not profitable in manufacturing, so battery-electric trucks and conventionally powered trucks are produced on one assembly line – according to MAN for the “best possible utilisation of flexible production facilities”. To achieve this, the manufacturer says it has relied from the outset on modular components for chassis and wiring that can be used by both drive concepts. In the eMobility Centre, MAN wants to develop the necessary processes for future series production directly during the manufacture of the first prototype vehicles.

The company is satisfied with the initial results of the cooperation between specialists from the eMobility Center, series assembly and the MAN Academy, as well as start-up experts, design engineers and process planners. “pre-series planning and testing have already become much more efficient,” the company wrote.

In addition to the plants themselves, the people must also be prepared for this. At MAN’s Munich plant, over 1,700 employees have so far completed the high-voltage sensitisation training. By the end of 2023, all relevant skilled workers in truck production in Munich are to be qualified for the series production of electric trucks.

“We have to win people over to the change and support them in the process of these fundamental changes,” says Thorsten Campehl, Munich Plant Manager. “A clear vision for the plant and the training and development of people are the key to achieving this. It is the intensive combination of theory and practice that makes the concept of the eMobility Center truly unique.”

As reported, the new electric truck made its rounds in Berlin for the first time in May – this was one of the near-series prototypes produced in Munich. The special feature: the vehicle is prepared for future megawatt charging. With the short charging times, a daily range of 600 to 800 kilometres should be possible. At the end of 2023, the first precursor small series of the electric truck is to be produced on the normal series production line in order to go into practical use with selected pilot customers from 2024.