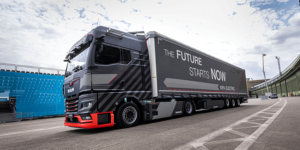 In the runup to this year’s Formula E races at the former airport Tempelhof in Berlin, MAN and ABB made a special appearance together with German transport minister Volker Wissing and a near-series version of the electric truck the company plans to release in 2024.

While the truck made a solid impression, taking the minister for a spin around the old aircraft halls, the most interesting revelation of the media event was the charging infrastructure the partners want to establish in the near future. In order to be able to achieve its promised daily ranges of between 600 and 800 kilometres suitable for long-distance transport, the MAN electric truck, which will be launched on the market in 2024, already has the technical prerequisites for future megawatt charging, which ABB E-mobility, as a leading global provider of charging solutions, intends to bring to market quickly.

The truck was already presented in February as a concept, after announcing plans to develop the vehicle in June 2021. At the time, there had been no mention of charging capacities, however, Alexander Vlaskamp, CEO of MAN Truck & Bus, did underline the decision to focus on battery-electric vehicles: “Only when sufficient green hydrogen and the corresponding infrastructure are available well after 2030 do we expect to use H2 trucks in selected areas of application.” However, the company is going to begin researching the field a bit earlier: In the “Bayernflotte” project, MAN trucks with fuel cell drive systems are to be installed in 2024 at five companies from the logistics and trade to examine their suitability for practical use.

For this purpose, there are already efforts underway in the German consortium: More than 20 partners from industry and science, including MAN and ABB, are working on the high-performance charging project. “HoLa” is being funded by the German Federal Ministry for Digitization and Transport (BMDV) and is the world’s first megawatt charging project. Along the Federal motorway (Autobahn) A 2, two high-performance charging points with megawatt charging systems are being built at each of four locations. The project is then later to be used to scale up the infrastructure across Germany.

By doing so, the partners want to become a leader in Europe in terms of charging infrastructure and referred to the logistical benefits of e-mobility, such as the reduced noise and emissions, which present major problems for urban logistics, next to the traffic issue posed by logistics being limited to operation in the daytime.

Urban logistics is not the only area where the partners see the potential for high-capacity charging: In the marine sector or in aviation, too, megawatt charging is the central interface for global harmonisation, according to ABB. To help branch out in these areas, ABB has a cooperation with Lilium, for example.

MAN also emphasized the need for a holistic analysis of the needs of an electric truck before purchasing one, for which they offer a 360° consulting programme including, in addition to advice on the actual electric trucks, consideration of conditions such as operating phases including cost optimisation, route analysis optimisation of costs, route analysis, fleet optimisation and advice on the necessary charging infrastructure.

“The accelerated expansion of the charging infrastructure is the only way to bring about the transport turnaround and achieve the climate targets,” stressed Alexander Vlaskamp. “We need to decarbonize road freight transport to achieve our climate targets. To make this happen, we are focusing above all on the market ramp-up of climate-friendly commercial vehicles and the development of a corresponding high-performance charging infrastructure,” said Federal Transport Minister Dr Volker Wissing, adding: “The project we are supporting on high-performance charging for e-trucks on the A2 is providing important learnings. What is important now, is to get more e-trucks on the road quickly. The partnership between MAN and ABB shows that we are on the right track.”