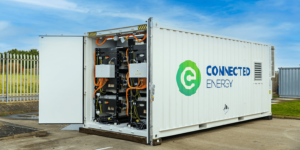 The Volvo Group (not to be confused with carmaker Volvo Cars) alone is investing around £4 million through its subsidiary Volvo Energy, acquiring a ten per cent stake in Connected Energy. With the funding totalling 17.5 million euros, Connected Energy is thus valued at 40 million pounds or 46.8 million euros.

The company plans to use the money to expand its operations and “move into utility-scale project development”, according to the statement. The “M-STOR” system will also be the first large-scale system to be developed. The energy content of the second-life storage units is to be between 20 and 40 MWh. So far, the old batteries have come from Renault, Forsee and Jaguar Land Rover, for example. In future, batteries from Volvo Group vehicles will also be used.

Connected Energy already has sixteen operational systems across Europe in Belgium, Germany, the Netherlands and the UK, the largest at Cranfield University in Bedfordshire, England.

“In order to grow the second life battery industry, strong pan-value chain relationships will be critical to Connected Energy as it expands, and the company’s new investors will complement this effort,” says CEO Matthew Lumsden.

“There is a great deal of untapped potential in the second-life use of batteries. This forward-leaning investment aims to facilitate the scaling-up of second-life battery energy storage systems and further secure circular business opportunities for the forthcoming ramp-up in Volvo Group’s second-life battery returns,” says Joachim Rosenberg, president of Volvo Energy. “Together with Connected Energy, we will minimize the environmental impact of the batteries that has powered Volvo Group vehicles.”

Volvo Buses had already announced a second-life project for the end-of-life batteries from electric buses in 2020. At that time, an agreement was made with Batteryloop, a subsidiary of Stena Recycling.