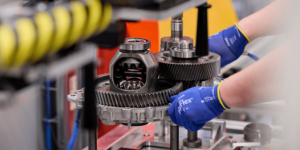 In Upper Austria, BMW wants to manufacture the rotor, stator, gearbox, inverter and housing for the sixth generation of its e-drives – and then also assemble them on two new assembly lines. The housing for the current fifth generation, which will be used in all new electric BMWs since the iX3 in 2020, already comes from Steyr. The assembly of the components manufactured in Steyr will then take place in the recently expanded electric drive production in Dingolfing, Germany.

More than 600,000 electric drives are to be produced per year at the Steyr plant – in parallel to the more than 500,000 electric drives from Dingolfing. For these tasks, existing production areas in Steyr will be converted and new areas will be created. A two-storey production hall will provide space for two lines for assembling the electric drives, including gearbox assembly. The new building will also be used for the production of power electronics. A second new building will expand the logistics areas. BMW says the production area will be expanded by a total of around 60,000 square metres.

In total, the German automaker is investing around one billion euros in Steyr by 2030 in order to make the plant CO2-neutral in accordance with the iFactory strategy in addition to electric drive production. From 2025 at the latest, the plant is to cover one hundred per cent of its energy needs from renewable sources – “through green electricity and district heating from regional biomass”.

Currently, the plant is still dominated by combustion engines. “One out of every two BMW Group vehicles around the world today already has a ‘heart’ built in Steyr. From 2025, we will also develop and produce the next generation of e-drives here,” says Milan Nedeljković, Board Member for Production at BMW AG. “Years of experience and a wealth of drive train expertise make BMW Group Plant Steyr the ideal location for the sustainable mobility of the future.”

“We are strengthening the Steyr location by continuing to expand expertise in electric drive technology,” says BMW Board Member for Development Frank Weber. “For the first time, an entirely new drive train will be developed here in Austria.”

Alexander Susanek, managing director of the BMW Group plant in Steyr, added: “By 2030, around half of our 4,400 employees will work in electromobility. This is also an enormous step towards securing jobs here at the BMW Group site in Steyr for the long term.”

The carmaker has not yet mentioned technical data on the sixth generation of e-drives at BMW, so far only describing a “high-performance e-drive”, “which will establish a new performance class”. The fifth generation is a current-excited synchronous motor, which, due to its design, does not require rare earths – unlike permanent magnet synchronous motors, the rotor does not contain neodymium-containing permanent magnets, but an electromagnetic coil, as in the rotor.

The sixth generation should then be used in the e-vehicles of the New Class, which is to debut in 2023 with a model in the 3 Series segment – BMW has already confirmed this. However, it remains to be seen whether this will be a vehicle the size of the 3 Series Sedan or an SUV. What is clear is that, unlike the current BMW BEVs, it will be a purely electric platform. The vehicle, internally called NK1, will come off the production line at the plant in Debrecen, Hungary, which is still under construction.

Honda starts construction of another electric car plant in China