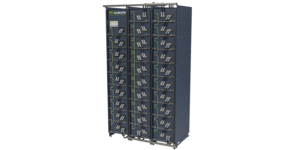 Swiss battery manufacturer Leclanché has completed the development of the third generation of a marine battery system tailored to the needs of shipbuilders in the production of electric and hybrid vessels. The first systems are scheduled for delivery next year.

Called the Navius MRS-3, Leclanché says the new system improves on the MRS-2 in battery energy density, modularity and safety. The MRS-3 features liquid cooling, which should not only enable the more compact design with up to 50 per cent higher energy density, but also increase the life of the battery system. As an option, Leclanché offers its customers a ten-year performance guarantee.

The MRS-3 (short for Marine Rack System) is based on the 65 Ah battery cell with G/NMC cathode, which was certified this March for the MRS-2. It is only in the completely new MRS-3 system that Leclanché can fully exploit the advantages of the new cell. Each module (called M3 Energy by the manufacturer) now contains 36 cells instead of 32, increasing the energy content to 8.7 kWh per module. With the modules, battery racks with voltages of up to 1200 VDC and a continuous discharge current of up to 720 A can be realised.

Besides the cells, the modules are the second important component of the new system. The modules are specially protected against the ingress of water, but also include battery management according to the master-slave principle for increased fail-safety and the aforementioned liquid cooling. This liquid cooling in the modules was supplemented by thin aluminium cooling plates between the cells. The connections for the cooling system are outside the module to reduce the risk of leaks inside the module. Throughout the rack, the cooling pipes are located at the front for easy access. The MRS3 racks are available in seven different heights so that the right system can be chosen for the installation space.

Deliveries of the system will begin in 2023 and it has already been selected in several projects, including Scandlines’ project to provide 10 MWh of capacity for Scandlines’ PR24 hybrid cargo ferry.

“Leclanché’s new Navius MRS-3 represents the latest generation in powerful, safe and emission-free electrification systems for the maritime industry,” said Anil Srivastava, CEO of Leclanché. “We’ve taken everything we’ve learned from our award-winning MRS-2 system and applied it to this project, setting a new performance standard for naval vessels, including its liquid cooling architecture, which is now widely recognised as the safest in the industry.”