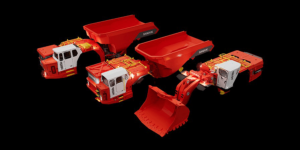 Mining company BHP has ordered eleven electric vehicles from Sandvik for its Jansen potash mine in the Canadian province of Saskatchewan. These are ten battery electric vehicles and one wired electric loader, which are to be delivered between 2023 and 2025.

With delivery by 2025 at the latest, Sandvik would be very much on schedule: the first commercial production at the mine is planned for the calendar year 2027. The Jansen Potash Project is located about 140 kilometres east of Saskatoon in the province of Saskatchewan. It is potentially the largest potash mine in the world, with an expected capacity of 4.35 million tonnes of potash per year.

The battery-electric loader is the LH518B model. The 18-tonne loader is said by the manufacturer to be characterised by its compact design: its dimensions are more on par with a 14-tonne truck, which allows the vehicle to be used in a 4.5-metre by 4.5-metre tunnel.

“Electric mining equipment is essential to achieve our goals of reducing emissions, improving productivity and, most importantly, protecting the health of our underground workers,” says Potash president Simon Thomas. “Jansen will have the lowest CO2 emissions per tonne produced compared to any potash mine operating in Saskatchewan today.”

Last year, Sandvik had already received orders from Canadian customers for battery-electric mining vehicles worth the equivalent of about €13.8 million.

Sandvik also announced that it had acquired Finland-based Akkurate. Akkurate is a solution provider for holistic battery management, which also includes a remote diagnostics and forecasting platform for batteries. Sandvik does not disclose the purchase price. Akkurate is to be integrated into the “Load and Haul” business area, which in turn is part of Sandvik Mining and Rock Solutions – i.e. the provider of the aforementioned e-mining vehicles.