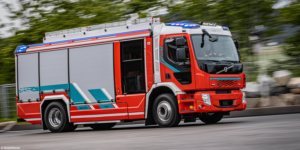 The Austrian fire brigade supplier Rosenbauer presented a complete range of electric emergency vehicles at the Interschutz trade fair. This includes the AT Electric based on an EV chassis from Volvo Trucks, but also an airport fire engine with an electrified Rosenbauer chassis and a turntable ladder.

First of all, the AT Electric: until now conventionally powered, the fire-fighting vehicle will soon also be available on electric series chassis from Volvo Trucks. The planned sales start for this AT Electric is the end of 2022. The exhibit at Interschutz is based on an HLF 20, an auxiliary fire-fighting group vehicle with 2,000 litres of extinguishing water on board.

The vehicle is based on a Volvo FE Electric, i.e. a 27-tonne truck. Rosenbauer relies on the smaller battery version with 2x 66 kWh net (200 kWh gross in total), which can be charged with up to 150 kW DC or 22 kW AC – the fire pump in the AT Electric is also powered by electricity. Depending on the topography, the range should be up to 100 kilometres. A range extender is also installed to ensure operational capability – for longer journeys or for longer pumping operations.

Rosenbauer intends to offer the AT Electric on other series chassis in the future. This will of course result in different data for the drive. Rosenbauer has listed all the other features of the fire fighting equipment in the AT Electric press release linked below.

With the Panther 6×6 Electric, the company has also presented the concept for an airport fire engine of the future on an electrified Rosenbauer chassis, with which around 90 per cent of all operations can be handled purely electrically. Since various airport fire brigades were directly involved in the development, the vehicle could be tailored precisely to the requirements. For example, long distances are not to be expected; on the airport premises, the approach usually takes two to three minutes. On the other hand, it is important that this approach is as fast as possible – according to Rosenbauer, the Panther 6×6 Electric accelerates to 80 km/h faster than a conventional 6×6.

The battery has been designed in such a way that several operational or movement trips can be completed with one battery charge, which is particularly advantageous in training operations. Here, too, a range extender is on board to guarantee operational capability and long pumping operation. The battery, the size of which Rosenbauer has not yet named, can be charged with up to 300 kW so that the vehicle is ready for the next electric mission after around 25 minutes in the station.

Also on display at Interschutz is the L32A-XS, a turntable ladder on a fully electric series chassis from Volvo Trucks. As with the AT Electric, this is based on the Volvo FE Electric. In addition to the 225 kW drive, an additional electric motor with 100 kW peak and 70 kW continuous power is installed for ladder operation. The battery has a gross capacity of 200 kWh, of which 132 kWh can be used. Charging takes place with a maximum of 150 kW DC or 22 kW AC.

According to Rosenbauer, the features of the L32A-XS as a turntable ladder are exactly the same as those of the version with conventional drive, and the operating concept is exactly the same. The rescue cage HR-500 MF has a payload of 500 kg (5 persons) and offers, among other things, the possibility of transporting persons in wheelchairs in a secured manner.

For the exhibition vehicle, Rosenbauer calculated two typical operational scenarios for a turntable ladder, which can be repeated several times with one battery charge – which is why a larger battery was not used. Concrete values from operational practice will be available when the L32A-XS electric enters service with Schutz & Rettung Zürich after the trade fair. Switzerland’s largest civilian rescue organisation will test the prototype under real operating conditions and share the findings and data obtained with Rosenbauer.