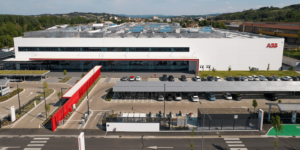 The opening of the new 16,000-square-metre plant in Valdarno will enable the production of more than 10,000 additional DC charging stations annually, according to ABB. The Swiss-Swedish group’s E-Mobility division had already announced the construction of the plant in July 2020 – at that time the start of operations was still targeted for the end of 2021.

According to the group, it has invested a total of 30 million dollars (28.6 million euros) in Valdarno. The models that will be manufactured in the new plant include the Terra 184 (180 kW charging capacity without an additional control cabinet), which was introduced in 2020, but also the top-of-the-range Terra 360 model, which can either charge one vehicle with up to 360 kW, or up to four vehicles simultaneously. In April 2021, ABB also presented the third generation of the Terra HP (350 kW or 2x 175 kW).

3,200 of the 16,000 square metres in Valdarno are earmarked for the R&D area, where not only new products will be developed, but also the prototypes of the new charging columns will be assembled. There are also 15 test benches where over 400 charging processes can be simulated per day.

The majority of the space, however, is earmarked for production. According to the announcement, seven production lines are in operation, so that a DC fast charger is produced every 20 minutes. An integrated automation solution will link production with a warehouse that is also automated. In this way, the group not only wants to be able to optimally control inventory, but also ensure complete traceability and efficient operation.

“The opening of our new Valdarno facility demonstrates ABB E-mobility’s commitment to building a zero-emission future. In addition to increased production capacity, the investment made in Valdarno helps to expand our innovative R&D activity, ensuring we can continue to cement our reputation as the world leader in electric vehicle charging solutions, delivering future-proof e-mobility solutions for the vehicles of today and tomorrow,” says Frank Mühlon, CEO of ABB E-mobility.

Around the opening of the plant, ABB had also confirmed that the planned IPO of its e-mobility division would be postponed indefinitely. While the second quarter of 2022 had been targeted, the market environment was now the reason for the postponement.