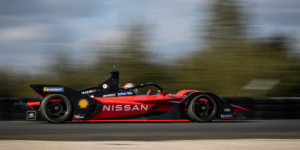 Following the recent announcement of McLaren Racing’s entry into Formula E for the upcoming season, McLaren Racing has now entered into a long-term cooperation with Nissan. Nissan will supply the electric drive system for the entire Gen3 era of Formula E to the British team as part of the partnership.

Nissan will also compete in Formula E under its own name in the Gen3 era up to and including 2026, following its acquisition of the e.dams racing team, so McLaren is a customer team for the Japanese company.

Formula E presented the Gen3 racing car at the end of April. The drive power increases to 350 kW in qualifying mode and 300 kW in the race – the rear-drive unit continues to be developed by the manufacturers. New in the Gen3 is a 250 kW unit front motor. However, this is only used for recuperation. The vehicles can thus recover energy with up to 600 kW – due to the strong recuperation, disc brakes are no longer installed on the rear axle. Only electric braking is used there.

As announced during the Berlin ePrix, McLaren will take over the two starting positions and parts of the team from the Mercedes-EQ team, which will withdraw at the end of this season. Since the Gen3 racing cars will also be completely new power units, the Mercedes power units will not be used any longer – the Andretti team, for example, is currently still racing with BMW power units, although the Munich-based company is no longer represented in the factory.

Nissan also has high hopes for the Gen3 power units. After nine races in the current season, the Japanese are only in eighth place in the team standings with 13 points – front-runner Mercedes has already scored 186 points.

“Our new partnership with McLaren Racing will be a powerful one, as the association will inspire collaboration and knowledge sharing,” said Ashwani Gupta , Nissan’s chief operating officer. “The pioneering spirit and drive to innovate are characteristics Nissan and McLaren Racing share, making them an ideal partner for us in Formula E and as we continue to electrify our vehicles.”

Zak Brown, CEO of McLaren Racing, added: As we are shaping the team for its first season as McLaren in Formula E, we are naturally seeking the best partnerships and opportunities on every front – with the technical aspect being one of the key areas. Nissan have proven their knowledge, craft and commitment over the last four seasons in Formula E, and heading into the Gen3 era, we have full confidence that the collaboration will bring both parties much success.”