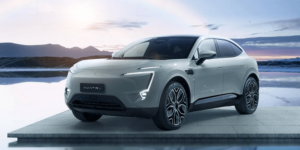 Changan, Nio and CATL’s Chinese electric car brand Avatr – previously known as Changan NIO – is working with Huawei to develop four new models by 2025 based on a new platform called CHN. This will include CATL’s cell-to-pack battery.

The new platform supports cars with a wheelbase of up to 3,100 mm and various vehicle types such as sedans, SUVs, MPVs and crossover models. As is usually the case with purely electric platforms, it is possible to produce drive layouts with 2WD as well as 4WD.

According to reports in Chinese media, the CHN platform is supposed to integrate the advantages of Changan Automobile, Huawei and CATL is the smart production of complete vehicles, smart vehicle solutions and a smart energy ecosystem. The platform is expected to feature not only high-performance, long-range cars but also “strong computing power, high intelligence and reliable safety functions”, CATL said in a statement.

The first Avatr 11 model, which has already been announced, is scheduled to hit the Chinese market in early August and will be equipped with a cell-to-pack battery from CATL in two variants for ranges of 555 and 680 kilometres, respectively, according to Chinese standards (CLTC). The battery voltage will probably be 750 volts, and it should be possible to recharge the battery for 200 kilometres in ten minutes.

While Changan contributes the automotive know-how and CATL the battery technology, Huawei is to be responsible for the software around autonomous driving and the intelligent functions in the cockpit. As a strategic partner, Huawei is heavily involved in Avatr’s technological development, although it does not hold a stake in the carmaker, Avatr CEO Tan Benhong said.

Changan Auto is Avatr’s largest shareholder with 39.02 per cent, while the second-largest shareholder is a CATL-led consortium with 28.99 per cent. The new CHN platform is a joint project between Avatr and Huawei. The acronym is not only meant to evoke “China”, but also stands for the parties involved: The C refers to Changan, H for Huawei and the N stands for CATL’s headquarters in Ningde. Nio is now only represented by a minority: At the end of 2020, the carmaker reduced its 50 per cent share in the joint venture, which was founded in 2018, to just 4.62 per cent, while Changan increased its stake from 50 to 95.38 per cent.