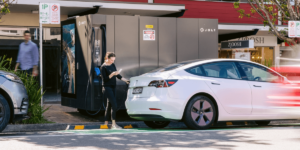 Endeavour Energy, a utility serving 2.6 million people in New South Wales, Australia, has teamed up with Jolt. The companies want to install a network of free electric vehicle charging stations across Western Sydney. The installations will utilise Endeavour’s streetside substations.

In a first step, Jolt and Endeavour target equipping such sites with 230 EV charging stations by 2025, with the number expanding to more than 1,000 chargers over the next decade through the partnership. The companies did not provide details on the power delivered through the charging stations.

Endeavour Energy’s Chief Customer and Strategy Officer, Leanne Pickering, expects the first charging stations to go live before the end of this year. “The partnership with Jolt harnesses the exciting momentum around EVs,” she said.

Endeavour Energy forecasts that one in four customers will be driving an EV within the next ten years. By 2040, they expect around 1.3 million electric cars in the network, which covers Sydney’s Greater West, Blue Mountains, Southern Highlands, the Illawarra, and NSW South Coast.

Jolt CEO Doug McNamee said he was “thrilled to be expanding our footprint to the wider Sydney area and provide free, fast charging to more EV drivers.” Looking at the current map, the incoming deal means a vast expansion of the company’s network.

Still, Jolt claims it has provided over 162,000 free kilometres since its stations allow seven kWh of free charging per day, providing around 40 to 50 km of range and a 15-minute charging time, depending on the type of vehicle. The free charging comes on the back of revenues from billboard advertising at the charge columns.

Across Australia, there has been growing momentum for e-mobility, as mentioned above. Since Scott Morrison was ousted from office this year, the new Labor government has promised to deliver better (or finally some) climate policies. Last week, they brought in the Electric Car Discount that will exempt many imported EVs from taxes by July.

Only a week earlier, on 20 June, the New South Wales Government also said it would budget 38Mn AUS (around €25Mn) to expand the network of high-speed and home charging points. The new funding was said to bring the NSW Government’s total EV investment as bundled under the NSW Electric Vehicle Strategy to $633 million (€415Mn/$439Mn).