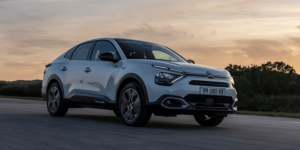 Citroën has unveiled the ë-C4 X, a crossover offshoot of its ë-C4 compact model. In most European markets, the French brand will offer only the all-electric ë-C4 X, while in some markets such as Eastern and Southern Europe, the C4 X will also be available with a combustion engine.

In terms of the electric powertrain, Citroën is relying on the combination of a 100 kW electric motor and a 50 kWh battery familiar from many other electric models from the Stellantis Group, which should allow a WLTP range of up to 360 kilometres in the ë-C4 X – three kilometres more than its name and technology brother. The charging system (11 kW AC and up to 100 kW DC) is also in line with the familiar model.

Some observers and customers may already consider the original ë-C4 a crossover – it is not a “real” SUV but also no longer a classic compact car. With the ë-C4 X, which Citroën now also calls a crossover by name, the French still bring the sedan into the concept: At 4.60 meters, the ë-C4 X towers over the familiar ë-C4 by a full 24 centimetres. The wheelbase, however, is the same at 2.67 meters.

The additional length is apparent in the ë-C4 X, which looks much more elongated, especially when seen from the side. The relationship to the ë-C4 is evident at the front, but the designers were able to break new ground at the rear: Since the roof arch of the ë-C4 X is longer and flatter, the attached rear spoiler was dispensed with. This had divided the rear window of the ë-C4 in two, and the designers had placed a black bar between the back window and the license plate. Since the spoiler and bar are omitted, the rear of the ë-C4 X has a much calmer appearance with its larger paint surfaces.

One conceptual difference in the ë-C4 is the rear window that forms part of the tailgate in a fastback style, resulting in a very large trunk opening. In the ë-C4 X, there is a much smaller opening like that of a notchback sedan. At 510 litres, the cargo compartment is also significantly larger than in the ë-C4 (380 litres).

With the ë-C4 X crossover, the Stellantis Group and the Citroën brand, in particular, are continuing the trend of focusing on unusual and independent body shapes. The ë-C4 X will be positioned between the smaller ë-C4 and the C5 X (4.80 meters), which is available as a PHEV, among other models. Sister brand Peugeot also unveiled a sedan SUV crossover this week in the form of the 408.

As Citroën brand chief Vincent Cobée indicates, the ë-C4 X came about as a result of customer feedback. “Many customers have told us they want an affordable, responsible and elegant alternative to the mass of hatchback and SUV offerings in the volume compact car segment, and this is our best interpretation of that need – a forward-looking, distinctive cross-design that delivers all the comfort, technology, safety and value you expect from Citroën, but also outstanding roominess and limousine versatility with the benefit of zero-emission, all-electric power,” he said.

Citroën has not yet released prices for the ë-C4 X, which Cobée said will “contribute significantly to our brand presence and sales expansion objectives particularly for International markets, as well as Europe.”

But the crossover will be priced above the ë-C4, which is currently available in Germany for 36,140 euros (before subsidies). In the UK, the ë-C4 entry-level trim starts from £28,495 after the Plug-in Car Grant has been applied.

New ë-C4 X and C4 X models will be built exclusively in Europe for all markets at the Stellantis Villaverde manufacturing facility in Madrid, Spain, with sales progressively commencing from Autumn 2022, so Citroën.
Expect the ë-C4 X to enter the market in early 2023.

Hyundai unveils the design for Ioniq 6