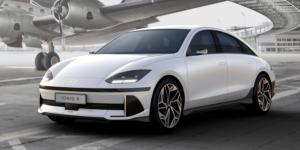 Hyundai has just revealed the design of the new Ioniq 6. Like the Ioniq 5, the second model of the electric Hyundai sub-brand Ioniq is based on the Electric Global Modular Platform (E-GMP) and offers a particularly aerodynamic line with a drag coefficient of 0.21.

Hyundai has not yet released technical data on the Ioniq 6, which will follow at the official world premiere next month in July. What is clear is that the Ioniq 6 will be an 800-volt vehicle. In videos around the unveiling, a wheelbase of 2.95 metres was mentioned, which should place the Ioniq 6 right between the two previous E-GMP models, the Ioniq 5 (3.00 metres) and the Kia EV6 (2.90 metres). This would suggest that the battery capacity will also be in the range of these models; the EV6, for example, has a battery of up to 77.4 kWh – but this is not confirmed for the Ioniq 6.

Probably the most striking view of the Ioniq 6 is from the side. Here, it becomes clear that Hyundai takes seriously its earlier statement to give each Ioniq model its very own design language and not just to bring offshoots of the emphatically angular and straight lines and angles characterised by Ioniq 5. In the Ioniq 6, the curved, flowing lines prevail – especially at the front and the roofline.

The Ioniq 6 has been rigorously designed with aerodynamics in mind, so the electric sedan should be able to take full advantage of all the efficiency benefits of the e-GMP. Hyundai says it placed great emphasis on efficiency when developing the platform. Because the technology is so efficient, they could afford to focus on the design of the first Ioniq 5. With its angular and, in some places, not particularly aerodynamic body, the 77.4 kWh-updated model has a WLTP range of 507 kilometres. It will be interesting to see what the more streamlined Ioniq 6 can achieve in terms of the standard range.

In contrast to the Ioniq 5, Hyundai has taken further aerodynamic measures with the sedan. In Europe, the vehicle will also be available with camera exterior mirrors, but in the USA, there will be conventional exterior mirrors due to regulations. The camera monitors are placed in the interior at the transition from the dashboard to the A-pillar – in other models with camera mirrors, however, the monitors are better integrated into the visual appearance; in Hyundai’s case, they look very imposed.

The interior picks up many elements of the Ioniq 5, such as the two side-by-side monitors, the gear selector lever and the steering wheel without a brand logo. However, some points have been developed a little further: The pixels instead of the brand logo on the steering wheel can and, thanks to LED technology, light up and thus be used as an additional means of communication for the vehicle for rear-end collision warnings. The open centre console concept of the higher Ioniq 5 has been replaced by a closed centre console in the sedan.

SangYup Lee Executive Vice President and Head of Hyundai Design Center has the last word: “Ioniq 6 connects an emotional convergence of functionality with aesthetics. The distinctive streamlined design is the result of close cooperation between engineers and designers, with obsessive attention to detail and customer-centric values at the core. We have created the IONIQ 6 as a mindful cocoon that offers personalised place for all.”