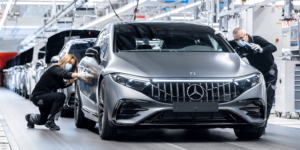 Mercedes-Benz has announced billions of euros of investment in its European assembly plants to equip them for the shift to electric cars by the end of the decade. This involves the production of vehicles on the new electric platforms to be introduced from 2025.

Mercedes says its German plants in Sindelfingen, Bremen, Rastatt and the plant in Kecskemét, Hungary, will start producing the new electric models in the Top End Luxury, Core Luxury and Entry Luxury segments from the middle of the decade. In July 2021, the German carmaker announced that Mercedes intends to introduce only electric platforms from 2025 onwards – now the (expected) distribution among the plants has also been determined.

The Sindelfingen plant is the lead plant for Top End Luxury and will produce models of the electric platform AMG.EA from 2025. The Bremen and Kecskemét plants will produce models of the e-platform MB.EA – i.e. the Core Luxury models – and the Rastatt and Kecskemét plants will build the repositioned models platform MMA from 2024.

In the case of the latter platform, the keyword “repositioned” is important: Mercedes boss Ola Källenius has been planning to thin out the Stuttgart company’s compact model range for some time. According to a report in the German business and trade newspaper Handelsblatt, electric successors are planned for the GLA, GLB, CLA Coupé and CLA Shooting Brake models. The B-Class will be discontinued but the A-Class is also to be discontinued in all body styles.

As part of the implementation of the Business Plan 2022-2026, Mercedes-Benz says it is investing more than two billion euros in its European production sites. As previously leaked, the carmaker is also increasing the depth of production and development in the field of electric drive technology. The next generation of electric drive systems will be developed in-house.

The production and assembly of parts of the e-drive systems for future models of the Mercedes-EQ brand will start at the Untertürkheim plant at the end of 2024. As reported, the Berlin plant will also expand its production portfolio in future to include the manufacture and assembly of high-performance electric motors from the acquired British specialist Yasa.

“Following the successful launches of Mercedes-EQ models in recent months, we are taking the next step: To outline the plan for our future production setup. Together with the employee representatives, we are consistently implementing the Mercedes-Benz strategy towards ‘electric only’,” says Jörg Burzer, Member of the Board of Management of Mercedes-Benz Group AG, Production and Supply Chain. “We are ready for the rapid scaling of electric vehicle volumes – not least thanks to our highly qualified and motivated team worldwide. With the new production setup we are further increasing our flexibility and efficiency and securing the future of our locations.”

Production of the EQS SUV will start shortly at the US plant in Tuscaloosa, followed by the EQE SUV later this year. Both models – like the sedans built in Sindelfingen and Bremen – are based on the all-electric EVA2 platform, which is not yet one of the platforms mentioned above. In Beijing, Mercedes also builds some electric models, since a few weeks also the EQE sedan.

The fourth platform, which Mercedes had announced for the period from 2025, is intended for electric vans. Mercedes has not yet provided any information on the production of the VAN.EA.

Hyundai unveils the design for Ioniq 6

Tesla builds “thousands” of Model Y per week in Texas