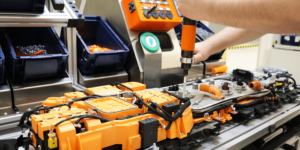 Mercedes-Benz is investing a double-digit million sum in the transformation of its Berlin plant in Marienfelde. While conventional engine and component production is gradually being phased out, Mercedes is planning a centre of excellence for digitalisation and the production of EV components.

Final assembly of electric components for future compact EQ models and the assembly of the so-called EE compartment for the integration of power electronics for battery systems for the EQS, among other activities, are to start in Berlin-Marienfelde before the end of this year. The background to this is that Mercedes is planning six electric product launches by 2022, specifically the starting shot for the compact power models EQA and EQB as well as the electric flagship EQS and the somewhat smaller sedan EQE will be fired this year. Next year, the duo EQE SUV and EQS SUV will join them.

The Stuttgart-based company is pursuing a tight schedule for the market launch of the EQA and EQS in particular. While the electric compact car is to be delivered as early as March, August is reportedly scheduled for the first handover to customers for the electric flagship.

Berlin Marienfelde is to become the new hub for the development, testing and validation of future software applications and concepts around the digital Mercedes-Benz ecosystem MO360, in addition to the production of EV components.


With 2,500 employees, the Mercedes-Benz plant is one of the largest industrial employers in the Berlin-Brandenburg region. Engines, engine components and transmissions are currently still being manufactured in Marienfelde on 500,000 square metres of factory space. “As the oldest Mercedes-Benz production plant in the field of conventional engine technology, the transformation of the Berlin site is a symbol of the shift in the automotive industry,” expresses Jörg Burzer, Member of the Board of Management of Mercedes-Benz AG, Production and Supply Chain. “Electrification and digitalization are the core pillars of our corporate strategy. Turning Berlin into a competence center for digitalization and allocating production volumes in the field of e-mobility, we can successfully secure the future of our long-established Berlin site.”

Mercedes does not hide the fact that the transformation will be accompanied by job cuts: The workforce is being prepared with targeted qualification measures, but “The reduction of series production volumes of conventional powertrain products will also lead to adjustments of personnel at the Berlin location”, Mercedes informs. “Adjustments” in this context means nothing other than job cuts. According to the company’s headquarters, the top priority is to design and implement personnel measures in a socially acceptable manner in close cooperation with the works councils.

In November there was a protest action organised by IG Metall in Berlin-Marienfelde after it became public that René Reif, the head of the engine plant until last autumn, had changed over to Tesla. The workers’ anger at the time was not only ignited by this personnel matter, but also by Daimler’s stance of not wanting to invest in engine production at the site and the cutting of numerous jobs there. The plans now presented for the transformation of the site are the result of an agreement between management and the works council.

Mercedes-Benz has provided an update on the transformation of its Berlin plant in Marienfelde into a centre of excellence for the digitalisation and production of electric components. For example, the site will expand its electric product portfolio in future to include the assembly of high-performance electric motors from the British specialist Yasa, which was acquired by Daimler.

Mercedes-Benz has also provided an update on the construction of the announced Mercedes-Benz Digital Factory Campus, saying that construction is now well advanced. In the coming year, a number of – what the company says will be state-of-the-art – pilot lines and test cells are to go into operation.

Sabine Kohleisen, Member of the Board of Management of Mercedes-Benz AG, responsible for Human Resources and Labour Director said: “The transformation towards an electric and digital future is both a great challenge and a great opportunity. We will only master it by working together as a powerful Mercedes-Benz team. The shift to electric mobility will change tasks and employment profiles. Our goal is to shape this change for the employees in a responsible, socially acceptable and future-oriented manner.”

Berlin will be a key driver of the overarching, worldwide Mercedes-Benz qualification activities; training programmes for the entire Mercedes-Benz production network will be developed and implemented there.

However, Kohleisen did not say how many of the 2,300 jobs that are currently predominantly bound to the production of combustion engine elements at the Marienfelde plant will be retained after the complete transformation.